Goop contributor/psychiatrist Kelly Brogan has been spreading junk scientific claims and conspiracy theories about the coronavirus. Here’s my latest for The Daily Beast. 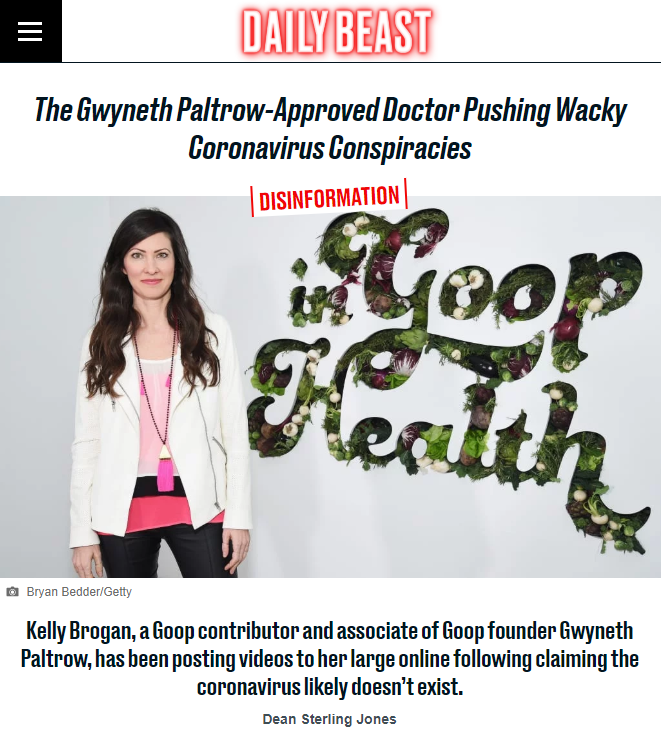 Last week, Gwyneth Paltrow’s “modern lifestyle brand” Goop announced it was closing stores in the U.S. and U.K. to help curb the spread of the novel coronavirus currently sweeping the globe. Meanwhile, Paltrow’s psychiatrist-associate Kelly Brogan, a high-profile Goop contributor, has racked up tens of thousands of views on social media spreading discredited pseudoscientific claims that the coronavirus might not even exist, and that symptoms attributed to the virus are likely being caused by widespread fear…

The story was subsequently picked up by the New York Post, The Independent, The Evening Standard Insider, Yahoo Style, Los Angeles Magazine, and The A.V. Club, among others.

Just when you thought telling women to stick stone eggs up their vaginas was the worst medical advice she could give, a once-Manhattan-based psychiatrist, anti-vaxxer and Goop-approved pusher is going viral again. But this time, it’s for her dangerous social-media posts that call COVID-19 a hoax.

Kelly Brogan (who has an MD from Cornell University and a master’s from MIT, according to her website) said in a video posted on Facebook last week that there is “potentially no such thing as the coronavirus” and that the reported deaths from the virus are “likely being accelerated by fear itself.” Further, she “personally [doesn’t] believe in germ-based contagion…”

[Brogan] has doubled down on her words, calling her message “personal empowerment,” and suggesting that people subscribe to her newsletter if they’d like to hear more of her views. She also then posted a screenshot of the Daily Beast article and a link to the video that is now available on Vimeo.

Via “Goop Expert Says Coronavirus Doesn’t Exist: ‘There is Potentially no Such Thing'” by Chelsea Ritschel, The Independent, March 24, 2020: 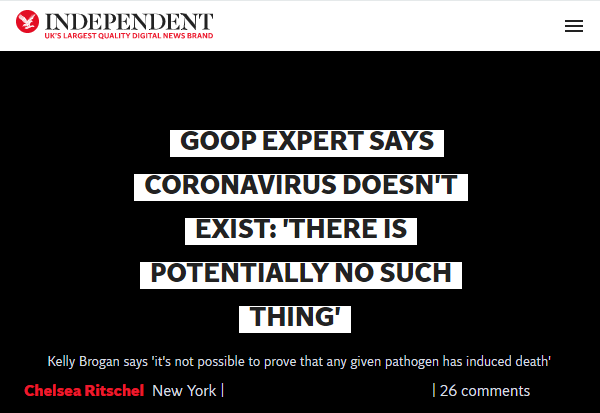 …According to The Daily Beast, Facebook and Instagram removed Brogan’s videos after determining that they “violate our policies”.

In a recent post to Instagram, Brogan acknowledged the removal and encouraged her followers to subscribe to her newsletter “rather than just following me here, because, well, you know…”

“Because censorship is real and underway,” she continued in the caption. “Two posts removed and one blocked in the past week. What a purification process this is!” 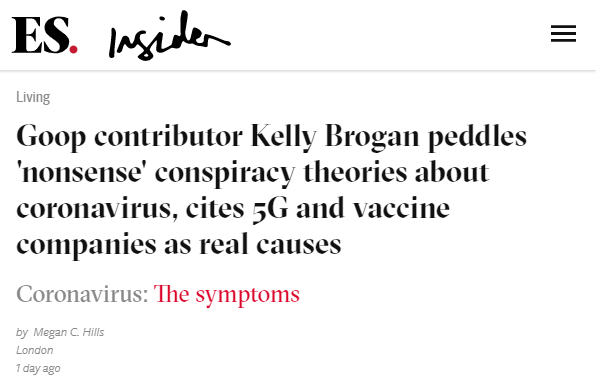 …There is no scientific basis for any of Brogan’s claims. Speaking to the Daily Beast, British pharmacologist David Colquhoun said, “She’s a very, very dangerous fantasist. I wonder whether she takes antibiotics if she gets a bacterial infection?”

The deputy editor of Skeptical Inquirer, a publication that critically examines fringe science claims similar to those that Brogan made, also weighed in. Benjamin Radford told the Daily Beast, “There’s always been this sort of populist appeal by people who reject science, and that’s exactly what’s going on here.”

“Unfortunately, outbreaks like this are exactly the wrong time to bring these things up because…they divert people from legitimate evidence-based treatments,” he continued.

…To Brogan, this was a form of censorship, which she said could potentially be part of a future government agenda to enact control. She cites the alternative narratives regarding current affairs as the remedy to her fear.

“This level of totalitarian government control that is not unlike the divide and conquer, dehumanization agendas that preceded the Holocaust,” she said. “This is where my mind can go. That is extremely fear inducing for me and probably as fear inducing as those that are washing their hands dry.”

Goop representatives have declined to comment on the video, however they did release a statement.

“We would suggest reaching out to Dr. Brogan directly as she didn’t make those comments on Goop’s platform,” they said.

Via “Please, for the love of god, don’t get your coronavirus advice from the Goop people” by Reid McCarter, The A.V. Club, March 24, 2020:

…The video keeps going and going, becoming more deranged as it rumbles on, but these points are probably enough to sum up why Brogan—an “expert” featured on Goop’s website and at its events—shouldn’t be listened to at all. If you want the total run-down of why Brogan and, by extension Goop, are dangerous horseshit, read the rest of the Daily Beast article.