Billy McFarland, co-founder of the doomed Fyre Festival, paid a professional Wikipedia editor in 2014 to create his current bio as part of a promotional effort to raise his public profile.

According to Wikipedia editing records, McFarland paid a user with the handle Bernie44 an undisclosed amount to promote his involvement in two tech startups: the failed content-sharing site Spling; and the ultra-exclusive Magnises black card, which with Fyre went down in flames following McFarland’s conviction last year for defrauding investors.

“McFarland founded Magnises in August 2013, and officially launched the card on March 1, 2014, aiming to create an exclusive black card that was community-oriented and technology-based, offering perks, guidance and cachet that would improve the everyday life of its members and appeal to the millennial generation,” reads Bernie44’s paid draft from September 8, 2014. “As of August 2014, Magnises has 3,000 members, including actress Rosario Dawson, former NBA player Baron Davis, and musicians French Montana, Wale and Gabe Saporta.”

Bernie44 disclosed having been paid by McFarland in accordance with Wikipedia’s June 16, 2014 update to its terms and services.

“[This] is to disclose that I am paid for some of the articles I create and/or edit, in most cases by the subject of the article,” Bernie44 wrote. “Whether paid or not, I always aim to contribute positively to Wikipedia and to edit within Wikipedia’s guidelines, with properly sourced, neutral, constructive edits. I hope my work is judged based on those standards.” 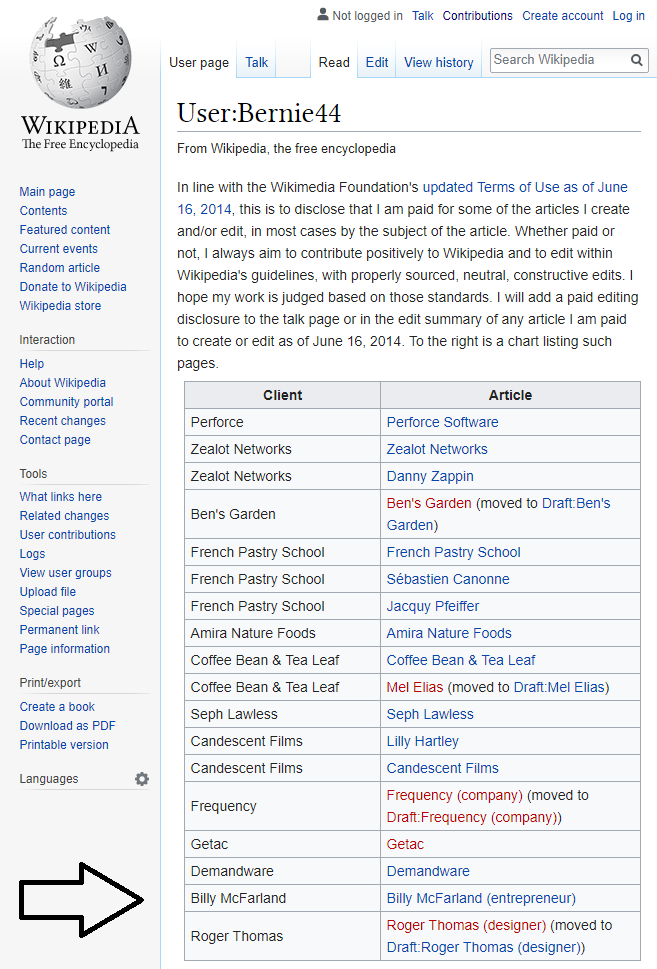 McFarland found fame in 2017 when his attempt to organise the luxury Fyre music festival in the Bahamas fell apart in spectacular fashion. The $1,200 to $100,000 per ticket event promised two weekends of music, gourmet meals, luxury villas, and parties on yachts with supermodels. But after months of failed preparations, the event crashed and burned in real time, leaving attendees stranded on the Bahamian island of Great Exuma without food, water, or shelter.

Last year, McFarland pleaded guilty to “fraudulently induc[ing] investments into his companies Fyre Media, Inc., Fyre Festival LLC, and Magnises, Inc., including in connection with McFarland’s failed venture to host a ‘once-in-a-lifetime’ music festival in the Bahamas.” He was later sentenced to six years in prison. 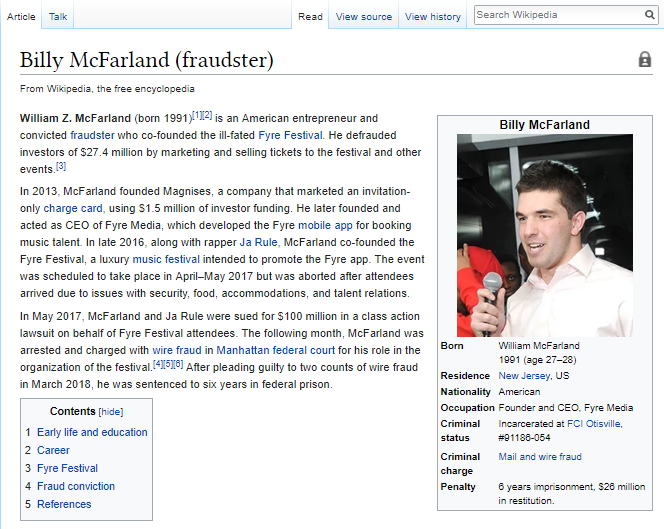