A white nationalist, a professional provocateur, a former revenge pornographer, and a big basket of deplorables

On August 14, 2017, Unite the Right rally organiser Richard Spencer held a press conference at his home in Alexandria, Virginia, where he spoke at length about the alt-right’s affinity for US president Donald Trump. 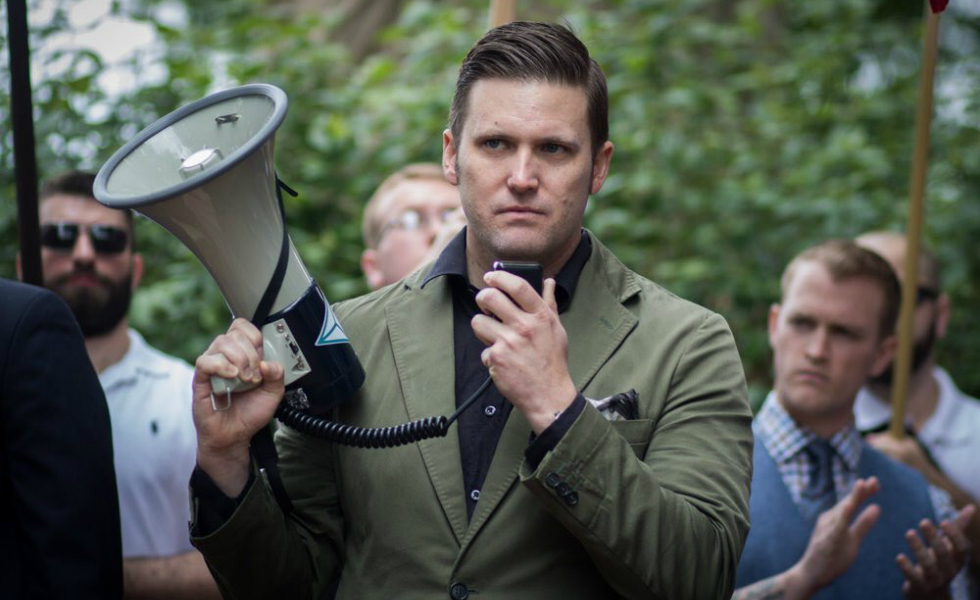 Signalling his own affinity for the alt-right, Trump refused to denounce the marchers, who’d mobbed the city carrying tiki torches and chanting Nazi-era slogans—even arguing that there “were very fine people on both sides.”

“White supremacists and neo-Nazis are, by definition, opposed to American patriotism and the ideals that define us as a people and make our nation special,” said McCain, who died late last month after a year-long struggle with cancer.

It wasn’t the first or last time McCain publicly clashed with Trump; the two men seemed to fight each other at every turn, often over basic American principles.

At the outset of Trump’s campaign, McCain denounced the unlikely candidate’s inflammatory anti-immigration rhetoric, and refused to attend an early MAGA rally in Phoenix, Arizona—McCain’s home state. When Trump subsequently took the stage to ridicule McCain before an audience of 15,000 ardent supporters, McCain accused him of having “fired up the crazies.”

The war of words escalated at an event in Iowa the following week, when Trump disparaged McCain’s service in Vietnam.

“He’s not a war hero,” said Trump, who was deferred from the draft no fewer than five times. “He’s a war hero because he was captured. I like people that weren’t captured.”

Amid the glowing eulogies following news of McCain’s death, Trump did not appear to waver from that opinion, initially vetoing an official White House statement praising the late senator. The episode hinted at deep divisions within the GOP, between the so-called “principled conservatism” espoused by McCain, and a radically new brand of conservatism, unconstrained by the normal parameters of American politics and decorum.

It also demonstrated the extent to which Trump’s presidency has emboldened previously unseen elements of the far-right fringe, who appeared to be taking cues from Trump in echoing some of his most flagrantly disparaging comments about McCain.

“Is it okay to be glad when a vindictive old bastard dies?” asked Milo Yiannapolous in an article published on his website, Dangerous, where the alt-right provocateur confessed to only being “a little ashamed of the warm feeling in my stomach” upon hearing about McCain’s death.

The vitriol continued to pile up on Gab, a social media platform associated with the alt-right, where users celebrated McCain’s death using the pro-Trump hashtags #MAGA,  #DrainTheSwamp, and #NotAWarHero.

On Twitter, Richard Spencer rehashed old conspiracy theories that McCain was responsible for starting a deadly fire aboard a naval aircraft carrier in 1967, and that in 2013 McCain met and had his photograph taken with the leader of Islamic terrorist group ISIS. Both claims were previously debunked by the fact-checking website Snopes.

Meanwhile in McCain’s home state of Arizona, Craig Brittain, a lesser-known member of the alt-right, has been running a one-man campaign against McCain.

On that website, Brittain facilitated and encouraged the publication of non-consensual nude photos—along with victims’ full names, home addresses, and Facebook screenshots—then charged hundreds of dollars for removing victims’ profiles using a second business he also controlled under the alias David Blade III.

Earlier this year, Brittain ran for senate seeking to replace outgoing senator for Arizona Jeff Flake. When he failed to produce enough votes to make the ballot, Brittain filed a lawsuit against Arizona’s governor Doug Ducey and secretary of state Michelle Reagan in an attempt to force a second vote, and in a “frivolous” attempt to remove McCain from office.

“[A] reasonable person would conclude that McCain’s seat has been ‘vacant’ since his final Senate vote in December of 2017,” Brittain said in an e-mail. “This does not weigh on his qualifications but rather is a simple statement of fact. He wasn’t there; the seat was vacated, THE TRUTH IS THE TRUTH.”

“Maybe God does exist after all,” read one of the posts. “If so, good job, God. I’m rooting for the brain cancer – the best chance to replace John McCain as a US Senator.”

When asked if he owned the account, Brittain said he’d never used Gab and suggested that the anonymous account holder was an impersonator.

When asked again, Brittain suggested that “maybe the site administrator of Gab realized it was a fake account and deleted it.” He subsequently sent a lengthy, pro-Trump diatribe criticising the mainstream media, and speculating that Chelsea Clinton—who sits on the board of directors at IAC, the parent company of The Daily Beast where I recently co-bylined a few stories—was personally involved in this article.

“Soon, President Trump will restore social media access (the loss of which crippled my campaign severely and left me vulnerable to impersonators) to people of all genders, races, creeds, origins, and beliefs,” Brittain railed. “That is when the current Mainstream News Media, which is Non-Representative, will be deleted. It will fade away and be classified as obsolete.”

In the end, Trump capitulated to mounting criticism over the White House’s “disastrous” response to McCain’s death, issuing a statement praising the late senator, and ordering that the flag be lowered to half-staff until after McCain’s interment.

The gesture was arguably a big move for a president known for bearing grudges, yet it did little to appease his critics, or, for that matter, his supporters on the far-right.

“I love you, Mr. President. But this was a pussy move,” said one self-described “Middle aged conservative Odinist.”

It was just the latest reminder that within the alt-right, the only consistent principle is trumping your opponent.