National Enquirer boss tiptoes away from his pal Trump, with an assist from Hollywood’s leading talent agency. Check out my latest byline at The Daily Beast 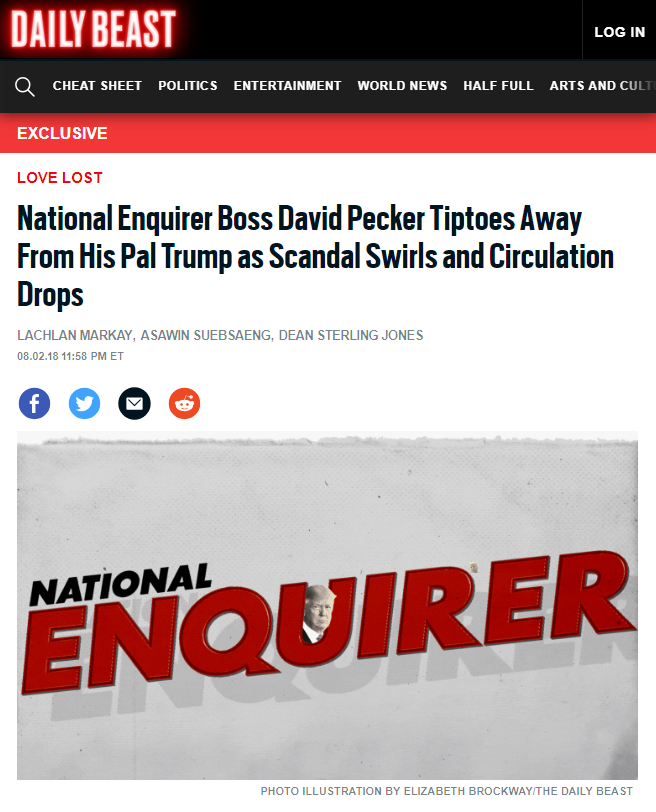 For years, Pecker’s tabloid had promoted and puffed up Trump’s political rise and his presidency. But once a regular fixture on the cover of the National Enquirer, Trump hasn’t appeared on it since an issue dated early May. That appearance was for a cover story on the various scandals swirling around Cohen.

According to multiple sources familiar with the situation, Pecker and the Enquirer’s top brass made a conscious decision to pull back on their pro-Trump coverage, just as Pecker’s media empire found itself increasingly embroiled in Trumpworld’s legal and public-relations woes.

A month after the Enquirer’s last Trump cover, the Wall Street Journal reported that federal authorities had subpoenaed Pecker and other executives at American Media Inc. (AMI), which publishes the tabloid. They sought records related to allegations that the company purchased the rights to former Playboy model Karen McDougal’s story of an affair with Trump, then killed the story for Trump’s benefit, a practice known as “catch and kill.” Prosecutors are exploring whether such an agreement may have constituted an illegal in-kind contribution to the Trump campaign by AMI.

As Pecker and his team were distancing themselves from Trump publicly, a more surreptitious effort was underway to cleanse the public record of details of Pecker’s involvement in the McDougal scandal and the AMI boss’s relationship with the president.

Over the course of a week last month, an anonymous Wikipedia user repeatedly tried to scrub Pecker’s page of damaging information regarding his alleged links to the McDougal hush-money scandal, removing huge blocks of text describing Pecker’s and AMI’s roles in paying the model for her story. The edits also removed references to Pecker as “a close friend of Donald Trump” and a supporter of his 2016 presidential campaign in addition to scrubbing mention of a federal investigation of the payment that stemmed from the raid of Cohen’s office (In a recently-leaked tape, Trump told Cohen to make the payment “in cash” to “our friend David,” assumed to be Pecker.)

The origin of the edits was even more interesting. They were made by someone using an I.P. address associated with the high-powered Hollywood talent agency William Morris Endeavor, according to publicly-available web database information. The same I.P. address has been used to edit pages for WME itself, the head of the agency’s literary division, and a number of WME clients.

Two people inside the offices of talent agency WME attempted to remove damning information from the Wikipedia pages of its Co-CEO Ari Emanuel and one of his parent company’s clients, American Media Incorporated, a new report says. [Note: It’s unclear how many people edited the pages].

The report said a second user also removed several blocks of text from Emanuel’s personal page about a 2008 sexual harassment case involving the agency. A spokesperson for Emanuel declined to comment on the matter.

Anyone with access to WME’s wireless internet network would be registered to their IP address, one individual familiar with the company told TheWrap (a similar sentiment was echoed in the Daily Beast). Wikipedia pages are edited by the site’s user community, so the attempted changes were all eventually undone. An AMI spokesperson did not return TheWrap’s request for comment on the report.

The effort to clean up Pecker’s profile, the Beast reported, was largely initiated to distance the media owner from President Trump. In addition to removing a section that referred to the men as “close friends,” it also stripped large chunks of backstory about Pecker and the alleged coverup of Trump’s accused affair with Playmate McDougal, the story said.