Yesterday, Techdirt hoisted the would-be censors who are abusing the new law. 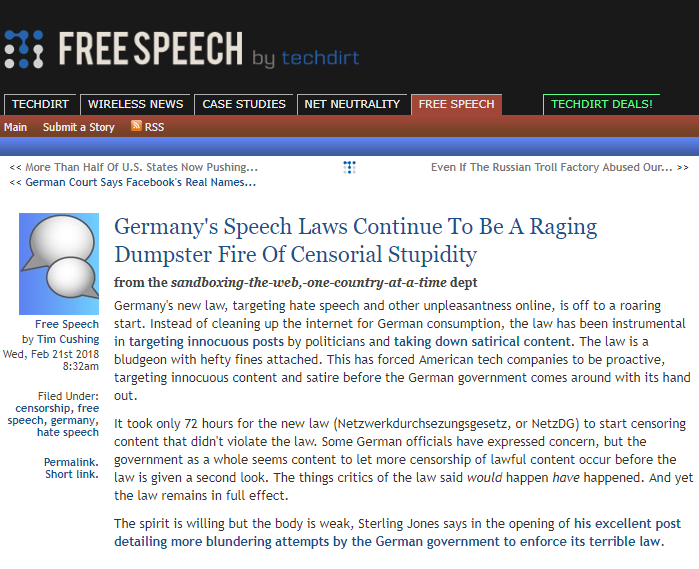 Via “Germany’s Speech Laws Continue To Be A Raging Dumpster Fire Of Censorial Stupidity” by Tim Cushing, Techdirt, February 21, 2018:

Germany’s new law, targeting hate speech and other unpleasantness online, is off to a roaring start. Instead of cleaning up the internet for German consumption, the law has been instrumental in targeting innocuous posts by politicians and taking down satirical content. The law is a bludgeon with hefty fines attached. This has forced American tech companies to be proactive, targeting innocuous content and satire before the German government comes around with its hand out.

It took only 72 hours for the new law (Netzwerkdurchsezungsgesetz, or NetzDG) to start censoring content that didn’t violate the law. Some German officials have expressed concern, but the government as a whole seems content to let more censorship of lawful content occur before the law is given a second look. The things critics of the law said would happen have happened. And yet the law remains in full effect.

The spirit is willing but the body is weak, Sterling Jones says in the opening of his excellent post detailing more blundering attempts by the German government to enforce its terrible law.

So, that’s how the law is working out. Sterling’s post is filled with takedown notices forwarded to the Lumen Database — all of them targeting speech that doesn’t appear to be unlawful even under Germany’s screwed up laws.