The ads comprise two videos from the Global Times defending China’s crackdown on political protests and attacking the Trump administration’s botched response to the coronavirus pandemic.

Update, August 28, 2020: The two Global Times ads have been removed from Facebook’s ad library. A message reads: “This ad is no longer available in the library. This can happen when an ad has expired or has been deleted, or when it’s incorrectly categorised as an ad about social issues, elections or politics.” Facebook has not returned a request for comment. 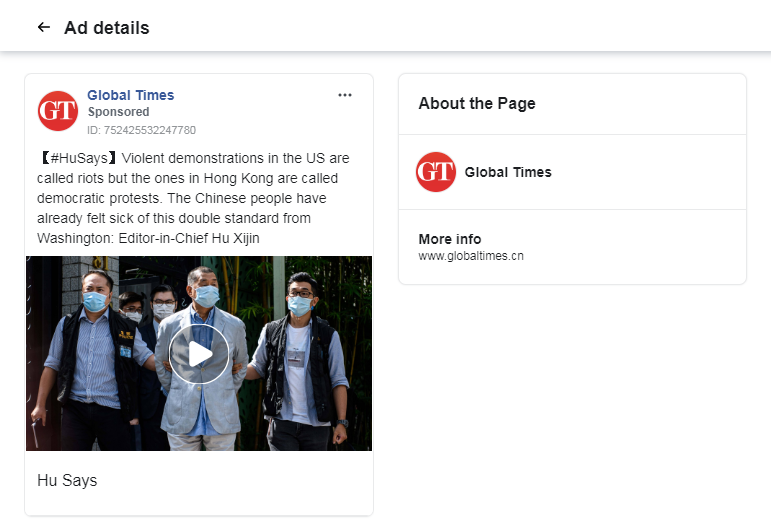 In April, the Daily Telegraph reported that the Global Times, an English-language adjunct of the People’s Daily, the official newspaper and mouthpiece of the Chinese Communist Party, had flooded “Facebook and Instagram with undisclosed political adverts whitewashing its role in the coronavirus pandemic and pinning blame on Donald Trump.”

The ads “initially ran without a political disclaimer, allowing them to hide information about who they were targeting and sometimes letting them sidestep Facebook’s strict rules on political advertising,” according to the Telegraph.

Facebook subsequently removed the ads and added a disclaimer, in accordance with the site’s decision to add labels to state-controlled media. But that hasn’t stopped the Global Times from continuing to run political ads on Facebook.

The new ads comprise two August 10 videos from the Global Times’ editor-in-chief Hu Xijin, who hosts an opinionated video series called “Hu Says.” Facebook doesn’t disclose how much money the Global Times paid Facebook for running the ads, or the potential reach of the audience the ads are aimed at.

In the first of the two videos, Hu tries to defend the high-profile arrests of 10 Chinese pro-democracy activists who were detained in Hong Kong on Monday under China’s new national security law, which has been widely denounced as a blatant attempt by the Chinese government to quash ongoing anti-government protests.

The arrests include media tycoon Jimmy Lai, who is accused of colluding with foreign forces, among other charges.

“In my opinion, this arrest sends a strong signal,” Hu says in the video. “The Hong Kong SAR government has not been intimidated by the series of US sanctions, including those against [Chief Executive of Hong Kong] Carrie Lam and other senior officials of the Hong Kong government” (for allegedly “undermining Hong Kong’s autonomy and restricting the freedom of expression or assembly of the citizens of Hong Kong,” according to an August 7 press release by U.S. Treasury Department).

Hong Kong’s protests began last June, against plans that would have allowed the Chinese government to extradite dissidents to mainland China. According to Hu, these protests are actually “violent demonstrations” that “have severely hit the city and endangered China’s national security.”

“China will not allow such rioting to continue,” Hu says in the video. “Let them shift to US cities like Portland.”

Toward the end of the video, Hu complains that “Violent demonstrations in the US are called riots but the ones in Hong Kong are called democratic protests. The Chinese people have already felt sick of this double standard from Washington. We will not put our attention on the attitude of Washington and the West before restoring order in Hong Kong.” 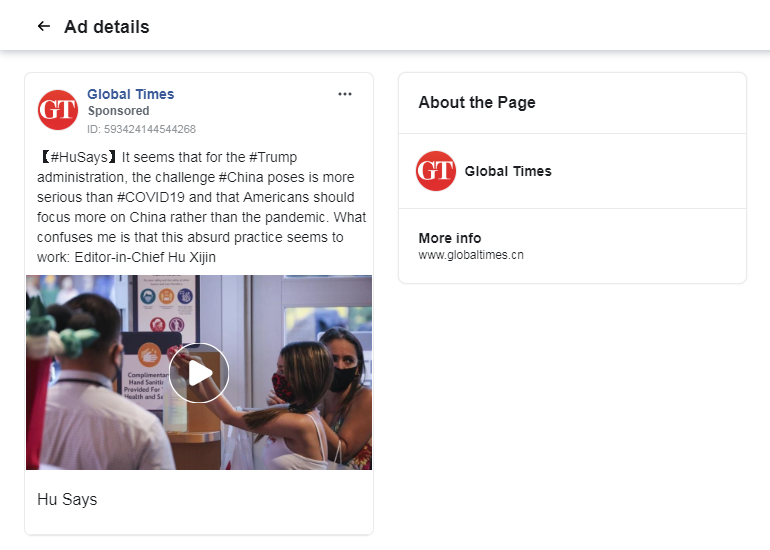 Hu’s complaints about Washington continue in the second video, in which he says “that for the Trump administration, the challenge China poses is more serious than the coronavirus,” and that “this absurd practice of Washington seems to work.”

Five million people have been infected and 160,00 people have died. The government has done nothing about it and many Americans have accepted it. In addition, the Trump admin said that TikTok poses security risks and China’s actions in Hong Kong and Xinjiang threaten the U.S. They are convincing people that these issues are obviously greater threats than the coronavirus and require an emergency response from the U.S.

Other recent ads from the Global Times include a viral video titled “Can’t believe this is a dog!” which shows a fluffy dog balancing on a basketball, riding a children’s scooter, and driving a toy car.