The British broadsheet had been publishing material from People’s Daily and China Daily, propaganda arms of the Chinese Communist Party. ICYMI, here’s my latest in BuzzFeed News and The Guardian.

Via “A British Newspaper Has Given Chinese Coronavirus Propaganda a Direct Line to the UK” by Dean Sterling Jones, BuzzFeed News, April 1, 2020: 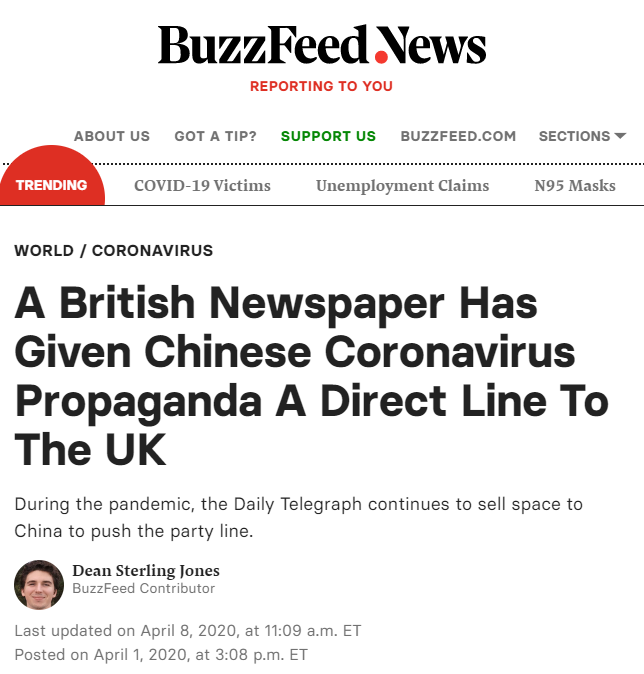 When medical authorities in China claimed they’d cured more than 750 cases of COVID-19, the disease caused by the coronavirus, using pseudoscience, one major British newspaper made sure there was space for China’s party line on the story.

“Traditional Chinese medicine ‘helps fight coronavirus,’” declared the March 3 headline, in the online version of the Daily Telegraph […] The article was published in a section of the Telegraph’s site called People’s Daily Online, a self-contained “advertisement feature” promising “all the latest stories about contemporary China’s dynamic development, diverse culture and world-leading infrastructure,” complete with a home page and sections for news, opinion, business, and sports, among other topics. But beyond a boilerplate disclaimer waiving responsibility, nowhere does the site disclose any information about its sponsor.

People’s Daily is the official newspaper and mouthpiece of the Communist Party of China. Its “advertisement feature” on the Telegraph’s site is part of a global propaganda campaign that positions the country as a leader in fighting the novel coronavirus pandemic, which has now killed more than 44,000 people worldwide.

Via “Daily Telegraph Stops Publishing Section Paid for by China” by Jim Waterson and Dean Sterling Jones, The Guardian, April 14, 2020:

The Daily Telegraph has stopped publishing paid-for propaganda on behalf of Chinese state media, amid growing scrutiny of how Beijing is using the pandemic to grow its influence in English-language media aimed at western audiences.

The long-running China Watch section, funded by the government-controlled China Daily news outlet, has appeared in the Telegraph for more than a decade. The content, written by Chinese state journalists, presents relentlessly upbeat views on China’s standing in the world in both print supplements and on a branded section of the Telegraph’s website.

However, in recent days the dedicated content has been wiped from the Telegraph’s website along with another section that reproduced material from China’s People’s Daily Online – the official outlet of the country’s ruling communist party.

Free Tibet, a charity based in London, has started an online petition calling on the Wall Street Journal and The Economist to cut ties with China Daily and Beijing Review.

Free Tibet has launched a petition calling for The Economist and Wall Street Journal (WSJ) to drop paid-for propaganda sections published on behalf of Chinese state media which have appeared in both publications.

The petition comes two days after The Guardian reported The Daily Telegraph has stopped publishing its China Watch advertising, which consists of content created by Chinese Communist Party media organisation China Daily and is designed to promote the CCP’s image abroad.

Free Tibet’s petition invites the public to send a message to the editors of The Economist and WSJ asking them to follow The Telegraph and confirm they will both stop publishing the material.