I wrote this story for BuzzFeed News, then I was targeted by a Russian disinfo campaign. BBC Monitoring reports

Earlier this month, I bylined a story in BuzzFeed News, “A Russian Propagandist Ran An Ad In The Washington Post — And Then Ran Victory Laps In Russian Media.”

After that story was published, a bunch of Russian news sites — including members of Patriot Media Group, which is run by Russian President Vladimir Putin’s personal chef — ran what appeared to be a coordinated disinformation campaign in a seeming effort to discredit my reporting.

Russian news outlets with links to a St Petersburg “troll factory” have accused US media of “censorship” after the Washington Post removed a controversial pro-Kremlin advert that briefly appeared on its website.

The advert — written in the form of an open letter — was placed in late January by Alexander Malkevich, the former editor of the English-language USA Really site, which has been linked by the US Treasury to Russia’s troll operation.

It called for the release of political strategist Maxim Shugalei, who was arrested along with his interpreter, Samer Hassan Ali Seifan, in Libya last year, on suspicion of trying to influence upcoming elections in the country…

The removal of the advert hit the headlines of at least three dozen sensationalist and pro-Kremlin Russian news websites, including USA Really and at least four other outlets that have links to the troll factory…

The Russian websites also hit back at another US publication, BuzzFeed News, over its reporting of the story. They quoted Malkevich as saying that the US security services interfered with the BuzzFeed reporting of the ad controversy and forced its journalists to twist his comments. 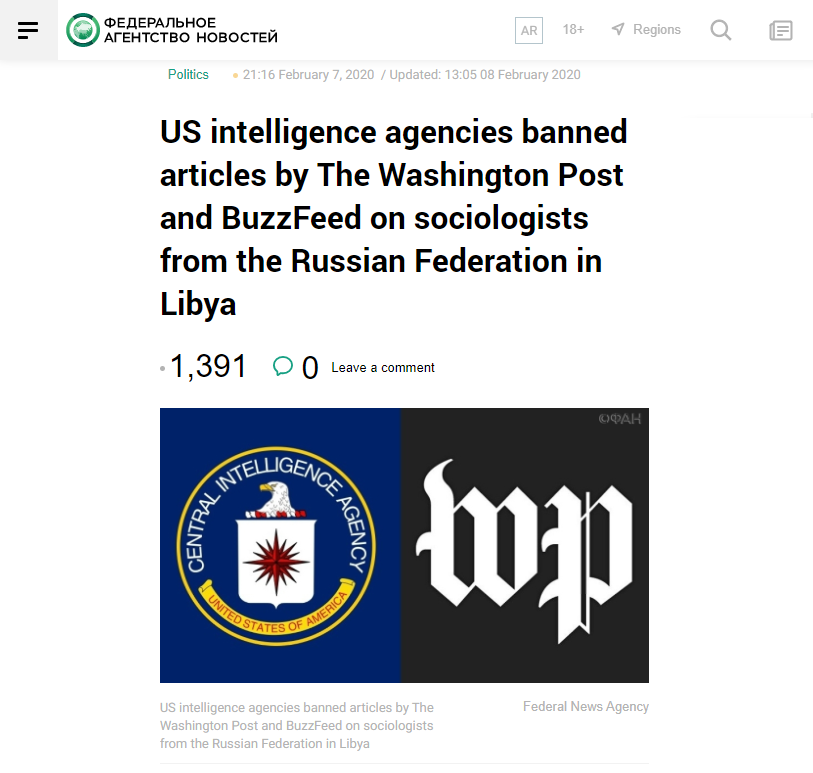 “BuzzFeed has confirmed that ahead of the publication of the article about censorship in the US media, employees of the security services approached the editorial office and strongly recommended that the essence of the article be changed,” the RIA FAN article said.

As a result, RIA FAN added, the report became a “powerful anti-Russian article in which Malkevich was described as a propagandist”.

Speaking to the BBC, the author of the Buzzfeed story, Dean Sterling Jones, denied the allegations. “In reality, I was never contacted by US security agents and all comments attributed to Malkevich are exactly as he provided,” he said.

When contacted by BuzzFeed, Malkevich “spuriously claimed that the US National Security Agency had forced the Washington Post to pull his ad”, Sterling Jones added.

[Malkevich] has a history of spreading conspiracy theories and unsubstantiated claims about the West in Russian media. Earlier this year, he claimed — without any evidence — that the Ukrainian Boeing shot down by Iran may have been downed by a US drone and accused the West of spreading fake news about the new coronavirus.

“This is just another attempt by Malkevich to, in his words, wage ‘information war,’ seemingly in order to pollute the narrative and stir up anti-American feelings back home,” said Sterling Jones, commenting on Malkevich’s latest allegations about the US media.