Organisers of the event applied for the wrong permit, before accusing U.S. authorities of conspiring against them.

Update, June 14, 2018: USA Really’s website has posted a new article stating that the flash mob will go ahead “in downtown Washington not far from The White House.”

Last month, I scooped the story that a media campaign linked to the Internet Research Agency (IRA) — better known as the Russian troll factory — had planned to flash mob the White House on June 14, Donald Trump’s 72nd birthday, to mark the launch of its new website USAReally.com.

The story was subsequently reported by McClatchy DC and The Rachel Maddow Show.

Courtesy of your friendly neighbourhood unpaid blogger, here’s another scoop (or two):

• Organisers of the rally have apparently cancelled their plans, having applied for the wrong permit (banners advertising the rally are still up on the USA Really website).

• The campaign says it’s currently operating from an office adjacent to the White House.

• Bonus scoop: The campaign says it originally hired a symphony orchestra to play at the rally.

The cancellation was announced via the Federal News Agency (FAN), the pro-Kremlin Russian website behind the campaign. FAN has been traced back to the IRA by open-source researcher Lawrence Alexander. Russian news websites including RBK Group and The Moscow Times have also published stories linking FAN to the IRA.

From the FAN’s article announcing the cancellation:

The Federal News Agency (FAN) planned to open in Washington its affiliated project, the information agency “USA Really. Wake Up Americans.” The office of the news agency USA Really is located in the White House business center opposite the US president’s residence and we officially requested permission for the celebration, knowing the delicacy of the situation – after all, we invited a symphony orchestra, prepared invitations to many people, and thought out the opening ceremony.

However, the Metropolitan Police Department categorically denied the information agency USA Really in coordinating the holiday action. Moreover, in addition to a written refusal, we were told by telephone that “the local police and intelligence agencies, including the CIA, have been informed [of the campaign] and will respond to all challenges on your part.”

Here’s what the DC Metropolitan Police Department’s Director of Communications told me when I asked if his department had denied USA Really’s rally permit:

Our Special Operations Division Planning Office has not received a request for a permit to be issued related to this.  You may want to contact the National Park Service’s Permit Office as well as they also issue permits.

Going by this screenshot of an e-mail posted on the FAN website, it appears that USA Really might have applied for a film permit instead of a rally permit:

We have received your permit request and are referring you to the Metropolitan Police Department for a rally/public gathering permit. I’m not sure which would suit your project – but it appears to me that filming this project may only be incidental to the ‘rally’ aspect which you requested.

Therefore your permit application is denied since we’ve determined this is a rally more so than a filming.

In a separate article on the campaign’s U.S. website, USAReally.com, the campaign accused “Deep State” security forces working from within the U.S. government of conspiring with journalists and social media platforms to violate its First Amendment rights.

“This project hasn’t even officially started yet, but the deep state and the security services have already launched into their standard defamation campaign, and have started up again with their typical tropes and tired labels that we saw pop up around the time of the last presidential election, where any line contrary to the anti-constitutional and pro-imperialist one is magically ‘fake news,’” the article reads. 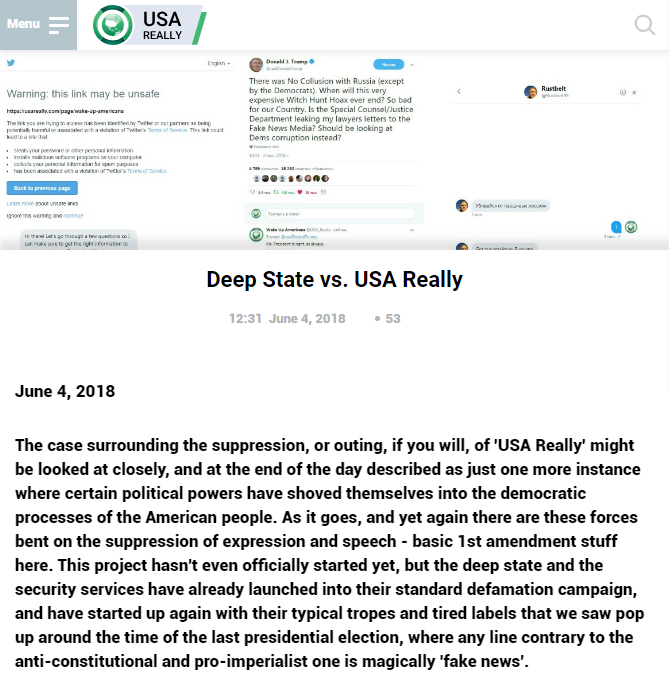 USA Really’s Facebook and LiveJournal accounts were both recently suspended following the widely seen reports by McClatchy and Rachel Maddow.

Meanwhile on Twitter, the campaign is busy dealing with an onslaught of criticism by doing what it does best: trolling the electorate.