Techdirt publishes article based on my blog post re: Erdoğan’s takedown demand of “humiliating” news reports comparing him to Hitler 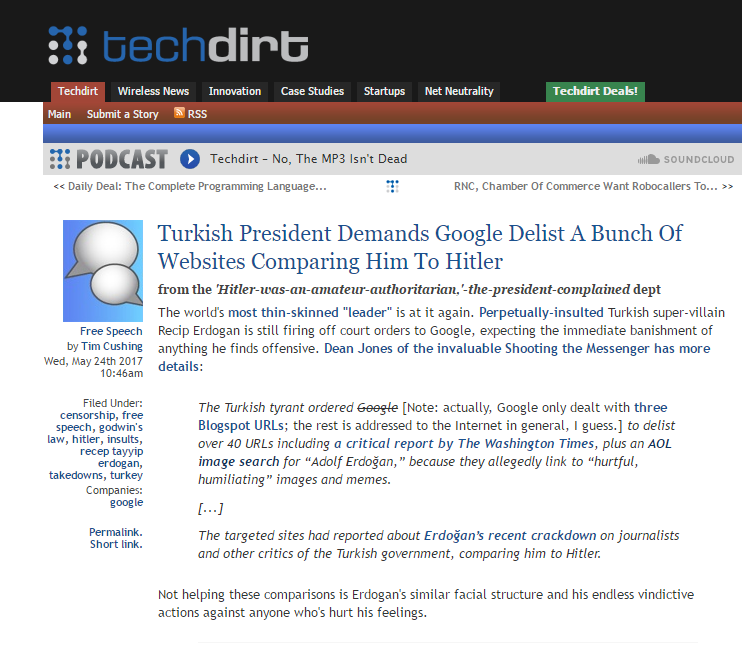 Via “Turkish President Demands Google Delist a Bunch of Websites Comparing Him to Hitler” by Tim Cushing, Techdirt, May 24, 2017:

The world’s most thin-skinned “leader” is at it again. Perpetually-insulted Turkish super-villain Recip Erdogan is still firing off court orders to Google, expecting the immediate banishment of anything he finds offensive. Dean Jones of the invaluable Shooting the Messenger has more details:

The Turkish tyrant ordered Google [Note: actually, Google only dealt with three Blogspot URLs; the rest is addressed to the Internet in general, I guess.] to delist over 40 URLs including a critical report by The Washington Times, plus an AOL image search for “Adolf Erdoğan,” because they allegedly link to “hurtful, humiliating” images and memes.

Not helping these comparisons is Erdogan’s similar facial structure and his endless vindictive actions against anyone who’s hurt his feelings.

Turkish law gives him considerable leeway to do this. Unfortunately, a small handful of countries have extended helping hands rather than middle fingers in response to censorship and/or prosecution demands. It’s unknown why the Turkish government thought Google could help it out with an AOL image search, but it’s equally unclear why it didn’t ask for the delisting of Google’s image search, which shows virtually-identical results.

The more someone humors this tyrant, the worse he’s going to get. And it certainly doesn’t help that Jones’ report comes on the heels of the Erdogan’s US visit, during which his personal bodyguards beat up American protesters. This prompted a tepid display of disappointment from the US State Department and a much more hot-blooded demand for an apology from the Turkish government US law enforcement daring to interrupt Erdogan’s bodyguards while they were beating up US citizens.