Last month, I blogged about the Association for Dietetics in South Africa (ADSA), who recently hired a PR “crisis manager” to answer uncomfortable questions about the “Kafka-esque trial” of University of Cape Town emeritus professor and low-carb high-fat (LCHF) proponent Dr. Tim Noakes.

Noakes risked losing his medical licence after former ADSA president Claire Julsing-Strydom complained to the Health Professions Council of South Africa (HPCSA) about a tweet Noakes had sent to a breastfeeding mother in which he said good first foods for infant weaning are LCHF.

When I e-mailed Julsing-Strydom for comment on the HPCSA’s not guilty verdict, I received a reply from Neeran Naidoo of Hewers, a self-described “niche market crisis communication and issues management advisors protecting personal and brand reputation, especially when things go pear shaped [emphasis added].”

Naidoo told me he’d been “contracted by the Dietitians Association of South Africa to manage their communications” and that “all queries on this case are referred to me.”

However, he stopped replying when I asked him about evidence suggesting Julsing-Strydom had complained to the HPCSA in her personal capacity and not on behalf of ADSA (more on that shortly).

After I published my item last month, Naidoo began tweeting from his Twitter account for the first time since joining in November last year.

Responding to questions from South African health and nutrition journalist Marika Sboros, who’s covered the Noakes inquiry from the start, Naidoo insisted there is no crisis, only a “conspiracy.” 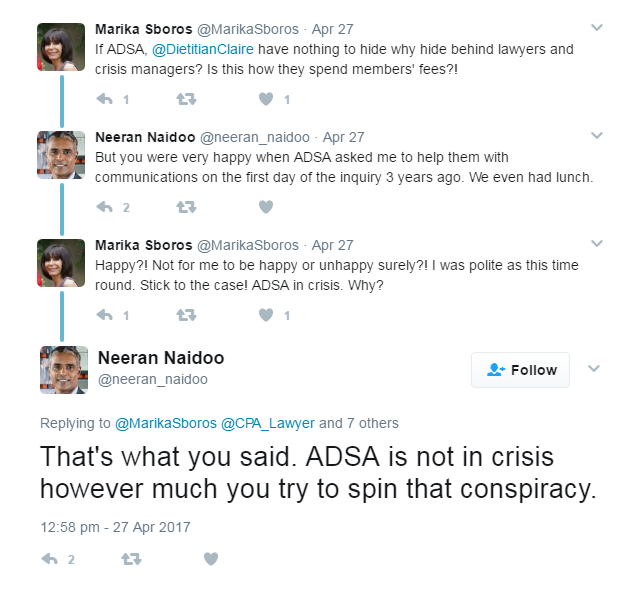 When Sboros asked if Naidoo’s services were funded by members’ fees or by sponsors, Naidoo tweeted: “And who funds you to be a Noakes praise singer masquerading as a journalist?” 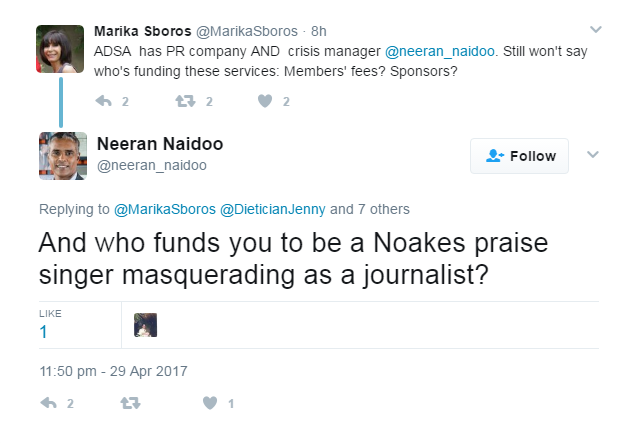 In the lengthy comment thread that followed Naidoo’s tweet, Twitter users including award-winning SA legal journalist Tony Beamish criticised Naidoo as being “unprofessional” for taking a “cheap shot unworthy of the respectable diet practitioners among those you’re supposed to represent.”

I’ve asked Naidoo what ADSA members think about money being spent on his services, and if they believe he is doing a good job of representing ADSA to the public. On that question, I also invited current ADSA president Maryke Gallagher to give her opinion. 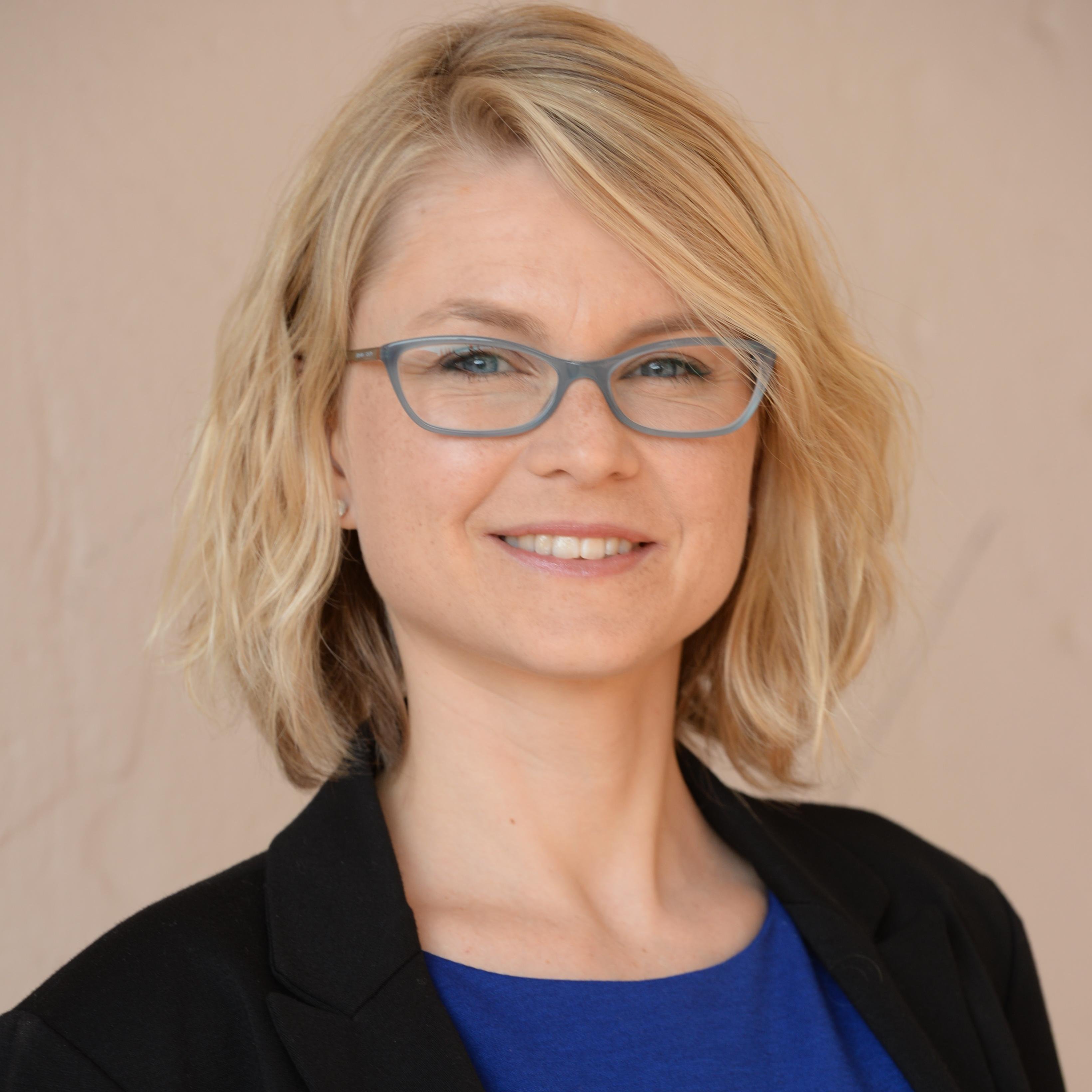 Gallagher declined to answer further questions, telling Marika Sboros she doesn’t wish to “provoke debate” and “harp on the past,” but here’s Sboros’ own reply to the question of whether or not Julsing-Strydom complained to the HPCSA in her personal capacity, and why this issue matters:

This issue has definitely and definitively NOT been answered. It has important legal implications for any future action stemming from the hearing. I heard nothing and see nothing in the transcripts to suggest that they addressed the evidence. My opinion is that HPCSA and Claire just ignored all the evidence that Noakes and Michael Van der Nest placed on record showing her personal complaint and unilateral change to her status. Reason? IMHO it’s difficult to answer away bald facts.

Perhaps if they released proof of correspondence showing that they informed Tim of change to her status and why, and thereafter secured his agreement and understanding…That might put the matter to bed finally.

Sboros has also permitted me to publish her unanswered questions to ADSA:

• ADSA’s response to the significant body of evidence that the defence presented for safety and efficacy of LCHF to treat and prevent obesity, diabetes, heart disease and increasingly, other serious health issues?

• Will ADSA change its dietary advice in response to the totality of robust science?  If so, when? If not, why not?

• Is ADSA aware of any science for the recommendation to “make starchy foods the basis of most meals”? If so, please provide full journal references. If not, what is evidence-base for ADSA’s support of this recommendation?

• What is ADSA’s response to the latest response in the SAMJ by Prof Tim Noakes and Dr Zoë Harcombe showing that the Naudé Review is so riddled with errors that its conclusions cannot be robust?

• Who funds the services of both ADSA’s PR company, Liquid Lingo and now Neeran Naidoo, CEO of Hewers Communications,  as ADSA’s crisis manager?

• Why does ADSA say that the issue of the HPCSA’s change to Claire’s status as complainant is settled when evidence on the record at the hearing contradicts that view?  Have Maryke and the rest of ADSA’s executive accessed and read all the transcripts, particularly those related to Claire’s status?

• I have still not received clarification of Claire’s email saying that she would “prefer” that I say she complained from the outset as president. That is despite her tweet, emailed letter of complaint and initial correspondence from the HPCSA to Prof Noakes showing clearly that she did so in her personal capacity only. Evidence at the hearing is clear that she complained in her personal capacity. When and why did HPCSA make the change? Why has it taken so long for Claire to clarify that statement?

• There are ambiguities in the document which ADSA executive signed in 2015, well after the fact of Claire’s complaint in her personal capacity in 2014. Who requested the document from the executive? What was the intention behind it?

• Clarification, please, on the statement ADSA released during the October 2016 hearing. In it, ADSA says that it did not lodge a complaint against Prof Noakes but was only “seeking clarity” on conduct of health professionals on social media? Does ADSA still maintain that position? If not, why the statement? Presumably, ADSA was unaware that the HPCSA does not have guidelines for health professionals on social media? Did ADSA ask the HPCSA for guidelines before issuing the statement?

• Last but not least: what is the status of ADSA executive member Katie Pereira’s complaint against Prof Noakes also lodged with the HPCSA in 2014? HPCSA has informed me the case is still ongoing. Will Katie pursue or withdraw?