Earlier this month, The Sun newspaper published “Who is Julian Assange, why does Pamela Anderson visit him in the Ecuadorian embassy and what is Wikileaks?” about exiled Aussie journalist and founder of WikiLeaks Julian Assange, who in 2010 was accused of sexually assaulting two women during a visit to Sweden.

The March 8, 2017 article, by reporter Holly Christodoulou, incorrectly stated that Assange “was in Sweden in August 2010 to speak at a conference when he met two men and had sex with them.”

Via the Wayback Machine: 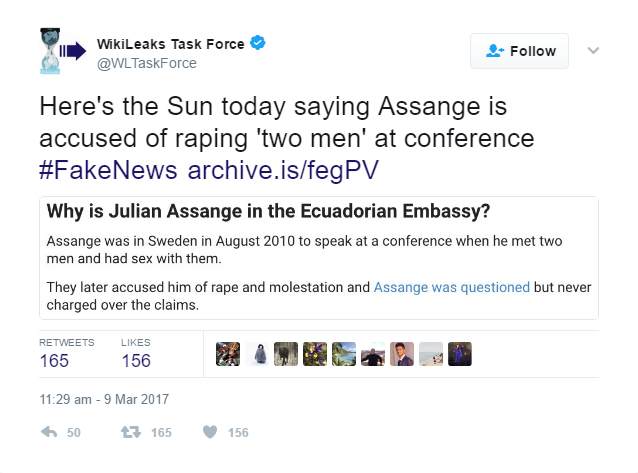 On my request, The Sun immediately corrected the error, and today added this correction notice to the bottom of the article: “A previous version of this story said that Assange had sex with two men who later accused him of rape. In actual fact they were women. The story was corrected on 10th March.”

In my follow-up e-mail to The Sun, I asked about WikiLeaks’ fake news claim.

A Sun spokesperson said: “This was an honest editorial mistake that we corrected as soon as it had been flagged, and added a note at the bottom of the article reflecting that change. This error was absolutely not deliberate – as evidenced by older articles on the Sun website about Mr Assange stating clearly the rape claimants were women.”