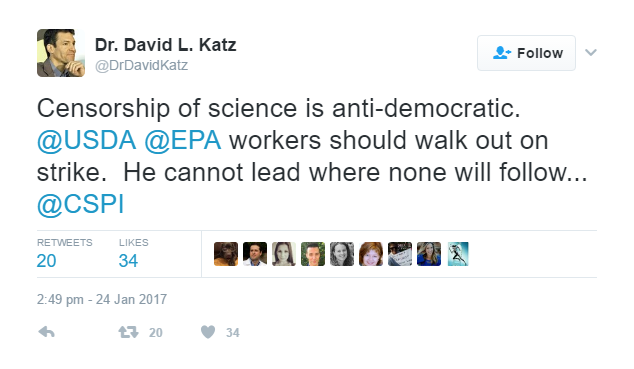 Per the above tweet, author/columnist Dr. David L. Katz, founding director of the CDC-funded Yale-Griffin Prevention Research Center, alluded to reports that newly elected US President Trump had ordered a communications lock-down of several federal agencies, including the USDA, responsible for setting the Dietary Guidelines for Americans.

Today, Dr. Katz expanded on that issue, in addition to broader issues of censorship and the scientific method, via his bi-weekly column for The Huffington Post:

Good science is an enemy to no one, since it advances understanding and knowledge…and thus choice. Good science empowers us with options. Censorship, of course, keeps us uninformed – or worse, misinformed. Ignorance is the ultimate form of repression.

Scientists are the first to acknowledge that the sounds of science are not always, immediately, perfectly in tune. It can take any number of revisions to get the lyrics and melody of truth just right. But this very process leads us robustly and reliably toward truth and understanding.

…When science is subordinated to silence, and the press to propaganda – only tyrants control the flow of information.

As readers of this blog will know, Dr. Katz’s recent concerns about “censorship of science” are quite the turnaround.

In 2015, Dr. Katz was one of 180+ co-signers to a flagrantly censorious retraction demand organised by the Center for Science in the Public Interest (CSPI) – a powerful Washington, DC nutrition lobby group.

In a letter to the BMJ, the CSPI had requested a retraction of an article by New York Times bestselling author/journalist Nina Teicholz about the questionable science underpinning the 2015 US Dietary Guidelines.

The BMJ nixed the CSPI’s retraction demand last month after a year-long investigation by two independent reviewers. They “found no grounds for retraction,” adding that Teicholz’s criticisms of the Dietary Guidelines Advisory Committee (DGAC) “are within the realm of scientific discussion.”

Via the Huffington Post, Dr. Katz trashed the BMJ for its “calamitous” decision, as well as the two independent researchers, and finally Teicholz herself – referring to her in passing as “a journalist with no known relevant expertise and a book to sell into the bargain.”

It’s not the only time Dr. Katz has attacked Teicholz in the media. 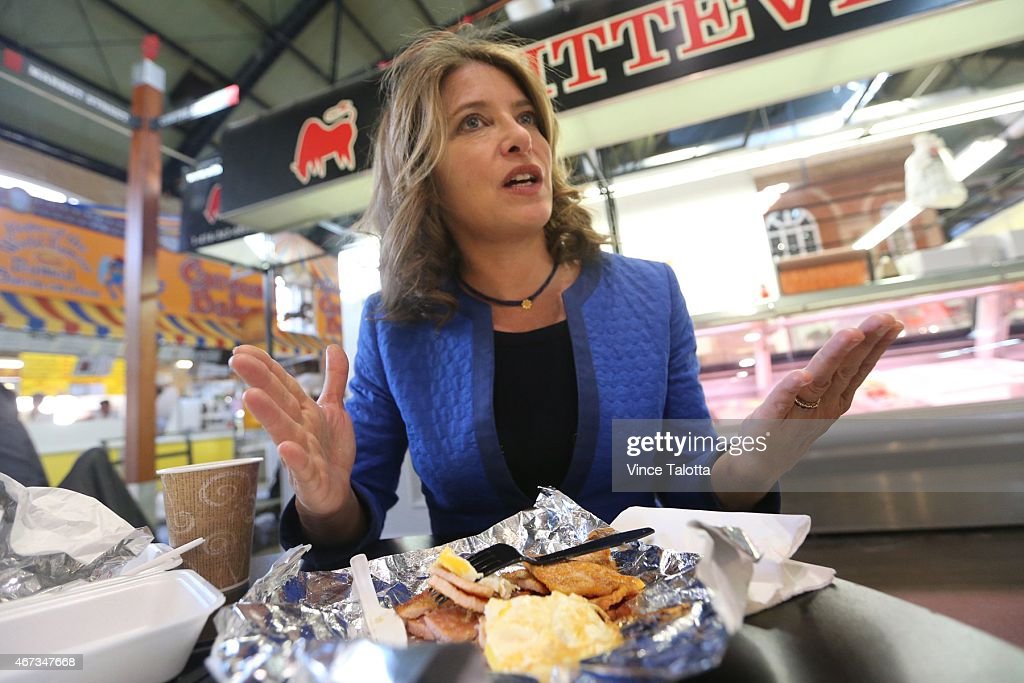 As reported on The Sidebar – my Atlanta, GA blogging buddy Peter M. Heimlich’s crack investigative journalism blog – Dr. Katz has been “clawing” at Teicholz for years.

Shortly before the release of Teicholz’s best-selling book on the history of nutrition science, The Big Fat Surprise (2014), he attacked her motives and speculated about her “rolling her eyes at this column on the way to cash her royalty checks.”

When her critique of the dietary guidelines came out in 2015, he argued that the BMJ should not have published her article because “she is not a nutrition expert, and not a scientist.”

He was later quoted in journalist Ian Leslie’s acclaimed April 2016 Guardian article about the nutrition wars, “The Sugar Conspiracy,” describing Teicholz as “shockingly unprofessional” and “an animal unlike anything I’ve ever seen before.”

That month, several prominent physicians criticised Dr. Katz for his ad hominem remarks, leading Yale University’s School of Medicine to publicly disassociate from its otherwise unrelated namesake, the Yale-Griffin Prevention Research Center, of which Katz is the founding director.

Yesterday, I e-mailed Teicholz for comment about Dr. Katz’s sudden change of heart re: his “censorship of science” tweet.

In her response, Teicholz said that “specious retraction efforts are also a form of censorship, as are intimidating columns trying to discredit the work of people whose views are different from your own.” 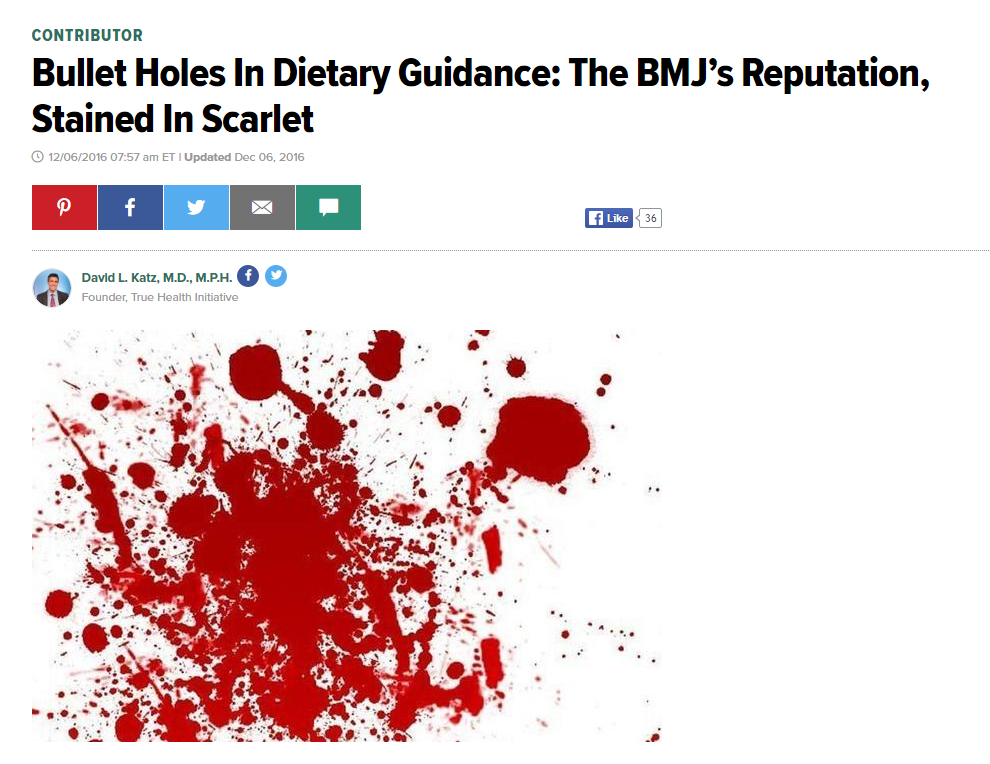 Strangely, Dr. Katz maintains that he – not Teicholz – is the victim of a “cabal” funded by “the beef industry.” The claims go back to November 2015, following the Huffington Post’s decision to pull two of Dr. Katz’s articles after it was revealed he had reviewed a sci-fi novel he wrote under a pseudonym, without disclosing authorship.

Later that month, he wrote an article via LinkedIn, in which he connected the retractions – the result of an unrelated enquiry by Peter M. Heimlich – to Teicholz’s BMJ article. But as Peter told the Yale Daily News, he was unaware of the dietary guidelines dispute when he broke the story on his blog.

Dr. Katz’s review has since become infamous on the Internet for its lavish prose and self-reverential comparisons to legendary writers like Milton, Yeats, Dickens and Plato.

On that note, here’s an especially moving paragraph from that review:

I found the writing — prose that nonetheless managed to hint at epic poetry — as enthralling as the story was riveting. In reVision, Colleen McCullough meets John Milton. Yeats meets Yourcenar. In the blend of rollicking adventure with utopian aspiration, J.K. Rowling meets Gene Roddenberry. Where characters are vividly rendered and complex ideas distilled to stunningly simple clarities, Dickens meets Dawkins. As a clash of other worlds illuminates the better ways our world might be, Plato’s Republic meets Lord of the Rings. Where lyrically beautiful writing and deep currents of humanism traverse expanses of law and folklore, science and faith, passion and politics — the Bible, Bill of Rights and Bhagavad Gita commingle.

2 thoughts on “Censorship and Science”