In two similarly worded articles on Open Democracy UK and Medium, Andrews argued that Facebook and Google are media companies, and should therefore be subject to stringent rules regarding antitrust issues, content, branding and “hate speech.”

Via “Europe should regulate Facebook and Google” by Leighton Andrews, Medium, December 9, 2016.

As well as their dominance of advertising, the two ‘titans’…have become the dominant news distributors as well. 44% of US adults get their news via Facebook according to the Pew Research Centre having taken over as the top news referrer from Google in 2015 according to the traffic analytics site parse.ly. At least originating news organisations get to keep their branding in the Google News app: in the Facebook News Feed, as Alex Hern pointed out in the Guardian, there’s no branding difference between fake news sites and established and respected news outlets…meaning that fake news can vie with real news for top spots.

Via “We need European regulation of Facebook and Google” by Leighton Andrews, Open Democracy UK, December 12, 2016.

What is needed is the necessary strategic alliance between other media companies, civil society organisations and academic specialists to drive an agenda forward to address the powers of internet intermediaries, in terms of content rules, competition issues and their dominance of the advertising markets which as we have seen has had the effect of undermining the newspaper industry in particular…

…Moving forward, there needs to be a coordinated and sustainable lobby at a European level, involving media organisations, advertisers, civic society organisations, and academic specialists interested in media policy to create the space for legislative action

Assuming Brexit goes ahead, and the UK does want a relationship akin to the EEA, then it’s likely it will have to adhere in practice to EU Media laws. EU legislation may be our last, best hope for effective action. There’s a thing.

I’ll leave it to the experts to debate the merits of antitrust regulation, but I can’t sit still for Andrews’ arguments in favour of controlling content, branding and “hate speech.”

Unlike the U.S., the EU famously doesn’t have a strong constitutional guarantee regarding freedom of speech or of the press. Consequently, countries within Europe have implemented a number of vague laws targeting political speech under the pretext of national security, racial and religious tolerance, and even women’s rights.

“Hate speech” is an especially meaningless term which has nevertheless been adopted by many European countries to punish unpopular speech. Just this month, Dutch politician and prominent Eurosceptic Geert Wilders was found guilty of hate speech by a Dutch court after he called for “fewer Moroccans” in the country.

While you might not agree with Wilders’ comments or sympathise with his worldview, the point is that the legal concept of “hate speech” is sufficiently vague to encompass all kinds of political speech, not just unpopular words and ideas.

The arbitrary nature of hate speech laws and other, equally vague speech laws have proven controversial in some EU member states.

There was outrage earlier this year when – at the whim of Turkish President Recep Tayyip Erdoğan – Germany agreed to prosecute prominent German satirist Jan Böhmermann, who had ridiculed the Turkish despot on national television. After all, what kind of democracy prosecutes its satirists?

Yet the decision should not have come as a surprise. Germany has long placed limits on “insulting” speech, in agreement with the various rulings handed down by the European Court of Human Rights.

As Hamburg international media law expert Dr. Ralph Oliver Graef told The Intercept in April: “If you agree that hate speech at a certain level is punishable, then you have to be open to the idea that some things are not allowed to be said, even about a dictator.”

Not wishing to succumb to the logical fallacy of the slippery slope, it’s easy to see where regulation of the media – and of speech in general – might lead. Just look to Turkey, where journalists are routinely prosecuted for reporting unfavourably about the government, and satirists are no longer free to openly ridicule those in power.

Is this what we want for our media or for our own hard-won freedoms? Personally, I’m with Welsh YouTuber Bill Hilton, who tweeted this response to Andrews’ Medium article: 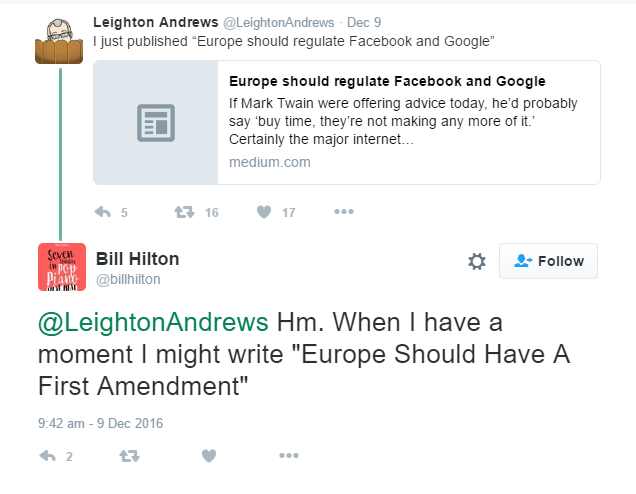