Last year, Dr. Butt was one of six so-called “hate speakers” singled out by Downing Street as “expressing views contrary to British values.”

The claims were made via Downing Street’s September 17, 2015 press release, titled “PM’s Extremism Taskforce: tackling extremism in universities and colleges top of the agenda.” 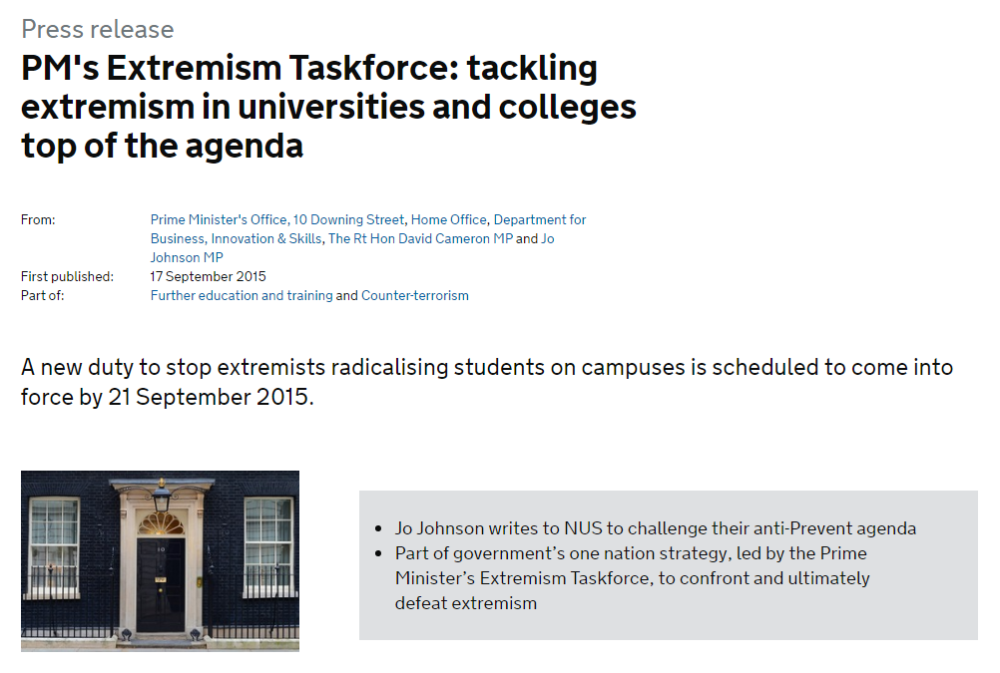 Citing work by Whitehall’s Extremism Analysis Unit (EAU), Downing Street claimed that in 2014 there were “70 events involving speakers who are known to have promoted rhetoric that aimed to undermine core British values of democracy.”

However, e-mails recently obtained via a public records request (click to read) show that much of the data attributed to the EAU in the press release – including information used to “name and shame” universities – was taken from a misleading July 2015 report by Student Rights, an arm of “right-wing think tank” the Henry Jackson Society.

As the e-mails show, Downing Street was still in the process of collecting case studies to support the updated strategy the morning prior to publication, and appears to have ignored a request from an internal fact-checker to amend figures about the number of events featuring “hate speakers” held on university campuses in 2014.

The e-mails also show that, despite having supposedly dropped plans for an statutory ban on so-called “extremist” speakers in March of last year, the government was still toying with the idea of a ban right up until September 16, 2015, just five days before the updated guidance officially came into force.

Via BBC News, Dr. Butt denied holding views contrary to British values, and expressed his intention to shine a light on the inner workings of government policy:

“I’m a father of three, I’m a British Muslim, a writer, an activist. I am not an extremist, either violent or non-violent.

“Being labelled as some kind of extremist does have a stigmatising effect. I have not spoken at any universities since I was named in the [Downing Street] press release.

“My aim isn’t just to clear my name, it is to bring transparency to the hidden processes by which individuals are tarnished with the label of an extremist, to ensure it is brought into the scrutiny of the courts.”

“The challenge, if successful, could have major implications for the controversial policy as it applies to universities and higher education,” she added.

According to the BBC, Dr. Butt’s lawyers will be challenging part of the strategy that aims to stop people from becoming or supporting terrorists, as well as challenging the government’s definition of “extremism,” which they say is ill-defined.

Additionally, they have been given permission to challenge the way the government’s EAU collected information about Dr. Butt, arguing the process lacks transparency, and that the procedure for identifying people as “extremists” is flawed and in breach of the law.

See also: “The Tyranny of Values,” my October 23 item re: Downing Street’s unattributed use of data from “right-wing think tank” the Henry Jackson Society to “name and shame” universities that host “extremist” speakers.