Two publications are no longer seeking membership with UK state-backed press regulator IMPRESS, with another on the fence

This week, it was announced that IMPRESS, a UK press regulator funded by motor racing tycoon Max Mosley, has gained recognition as a state-backed media watchdog.

The decision was made by the Press Recognition Panel (PRP), the government-funded body set up in the wake of the 2012 Leveson Report to oversee press regulation.

Under Section 40 of the Crime and Courts Act 2013, which has been passed by Parliament but is awaiting a final signature from Culture Secretary Karen Bradley, publishers who are not a member of an approved regulator could face “exemplary” damages – for instance, having to pay their opponent’s costs in libel and privacy cases.

In June, IMPRESS revealed the names of the first 30 publications (comprising around 25 individual media publishers) to have signed up for membership. 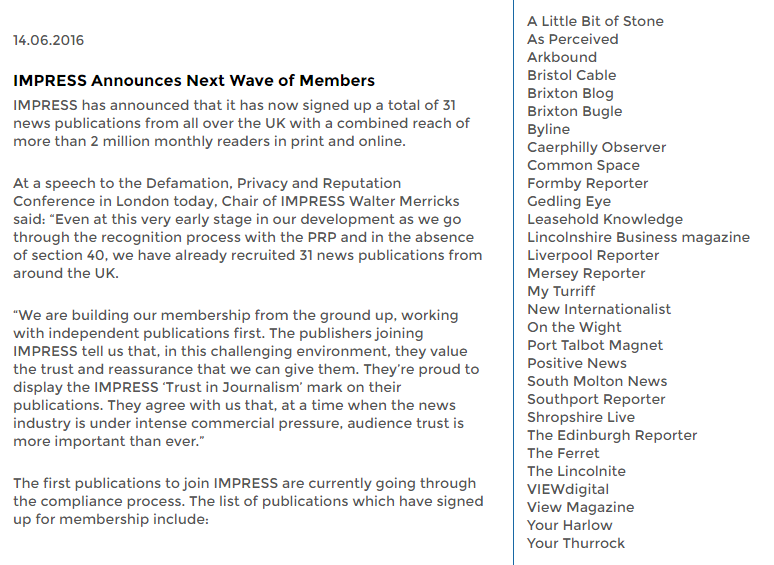 However, two of the publications listed by IMPRESS in the above press release – Leasehold Knowledge, a London-based property rights campaign website, and the Port Talbot Magnet, an independent Welsh paper – were not included in the official list of regulated publishers.

According to Lee Hall, Business Manager and Company Secretary at IMPRESS, the Port Talbot Magnet dropped out after it stopped publishing the print edition of the paper.

When I asked the Port Talbot Magnet for more information, I received no reply.

But here’s what founder of Leasehold Knowledge Sebastian O’Kelly sent me when asked about his organisation’s decision not to join IMPRESS:

“Two years ago we were having a very litigious complaint on our hands from a developer using one of London’s main media law firms, so we looked into press regulation.

However, since then we became a registered charity and we decided not to pursue this further. It was compliance in a scheme to protect us from the expense of vexatious defamation claims that interested us, not any issue of press regulation politics.

Our contact with Impress began before the involvement of Max Mosley.”

Another publication, The Edinburgh Reporter, features on both lists of IMPRESS members.

However, when I asked the Reporter’s editor Phyllis Stephen for her comments, she said she was no longer certain about her publication joining IMPRESS.

“We have not yet signed on the dotted line – because of the concerns which have been raised – and because we were waiting to see if IMPRESS would be approved as it was yesterday.

Still not quite sure whether we will be going forward with our membership at this stage – just not really had time to consider all of the implications.”

To date, only 50 publications (comprising around 33 individual media publishers) have signed up with IMPRESS.