Last week, I blogged about the Crown Prosecution Service (CPS) having exaggerated the 2015-16 rape conviction rate.

These figures were widely reported in the UK press, including the Independent newspaper.

Via the WayBack Machine, the Independent’s Sept. 6 article

However, a close look at the CPS’ 2015-16 Violence Against Women and Girls crime report reveals that the rape conviction rate “includes cases initially flagged as rape [but] where a conviction was obtained for an alternative or lesser offence” and “where a rape charge is subsequently amended.”

Yesterday, I received notification from the Independent’s readers’ liaison assistant Jane Campbell that the article has been updated.

Your point is well taken and the article has now been changed to reflect that rape conviction figures also include cases where a conviction was obtained for an alternative or lesser offence.

I hope that, in spite of your concerns on this occasion, you will continue to read and enjoy The Independent. And please do not hesitate to contact me again in the future should cause arise.

Here’s what the article reads now: 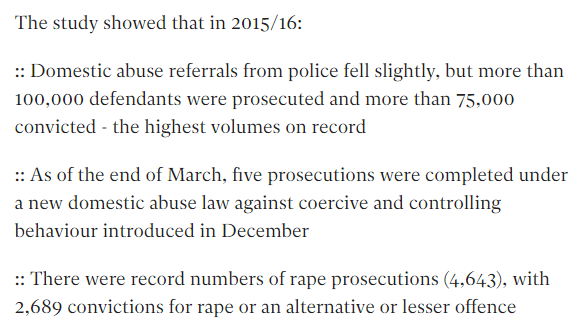