Last week, on April 1, the Greater Glasgow Police force issued a rather cryptic warning to social media users via Twitter to, quote, “think before you post or you may receive a visit from us this weekend.” 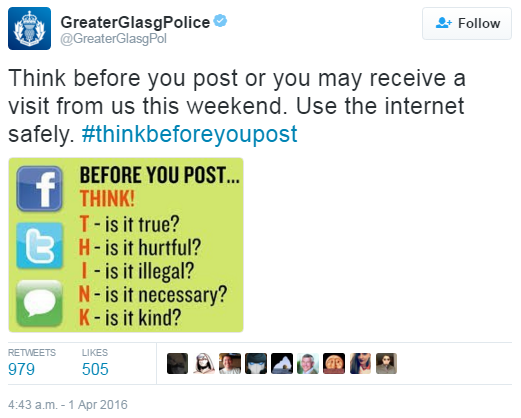 Unsure whether or not this latest tribute to George Orwell was intended as an April Fool’s joke, I emailed Police Scotland asking what precautions social media users should take to avoid receiving a visit from Glasgow coppers.

Thank you for taking the trouble to contact us regarding the recent ‘tweet’ from our Greater Glasgow Police Twitter account.  Firstly, may I apologise for the concerns this has caused you personally as it undoubtedly has for others judging from the reaction on social media, both positive and negative, over the past few days.

This message and acronym ‘THINK’ came from a third party account and was originally ‘re-tweeted’ by a community police team in Lanarkshire and then subsequently re-tweeted by other police teams. Likewise, our Safer Communities team in Glasgow saw these re-tweets (we all follow each other’s accounts for key messages to promote) and thought it was a simple enough message to encourage people to avoid hateful comment on social media which is often reported to the police as bullying, trolling etc..  This message seemed to us particularly pertinent following the dreadful events in Shawlands which had led to some people ‘trolling’ messages of support for the Shah family and wider community.  Occasionally, such trolling crosses the boundaries from being merely distasteful into criminality under various hate crime legislation or indeed domestic abuse or threats.

To answer specifically your question, there is no test applied by my officers as to what passes the THINK criteria.  Clearly, that is not the Police Service’s role and we are concerned with investigating reports of behaviour on social media that is suspected to be illegal.  We are certainly not the ‘good taste’ police nor are we in any way seeking to stifle free speech – indeed, we regularly police public events where opposing groups do not agree with alternate political standpoints but we ensure that Articles 9, 10 and 11 of the European Convention on Human Rights are protected.

As such, the colloquial phrase, “receive a visit from the police” which appears in this controversial tweet is misspoken and misleading.  Such police action may only be applied when a crime or offence is reported to us by another member of the public – we do not routinely monitor social media as frankly, we are far too busy answering calls from the public for assistance, investigating reported and detected crimes and undertaking a myriad of other duties than to find time to police the internet as some pressure groups would rather have us doing.  Of course we do investigate cybercrime but that is a new and rapidly developing area of law enforcement not concerned with name-calling or offensive remarks on social media.   I am sorry this phrase “receive a visit” was used in the tweet and rest assured, the officer who tweeted this message is sorry too – it was certainly not their intention to cause a furore or any confusion in this regard.

Thank you again for taking the time to write to Police Scotland.  It is through practical criticism and challenge that we learn how better to police our communities with the public’s consent and support.  Social media is undoubtedly a great opportunity for the Police to quickly and effectively communicate with the public but it also carries the risk of getting our messages wrong on occasion.  I hope I have reassured you that we do not apply a THINK test when assessing complaints about social media and that on this occasion, we would have done well to follow the THINK advice ourselves before tweeting that message.

With reservations as to whether the police or any other authority should have any jurisdiction over social media, Inspector Quigley’s answer helps ease the dystopian impulse. I don’t recall Orwell being so reassuring.

One thought on “The #ThinkBeforeYouTweet Police”