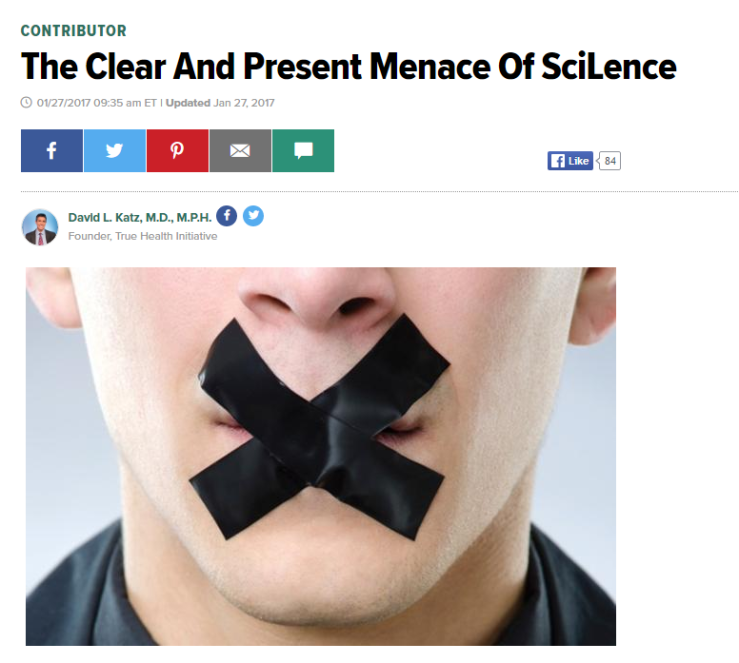 In that article, Dr. Katz railed against reports that the Trump administration had issued gag orders to the USDA and other US federal agencies:

I have a friend who told me he voted for Trump for one reason only: the Second Amendment. I have a question for him and others like him: what purpose can the Second Amendment possibly serve when the First Amendment is desecrated? When science is subordinated to silence, and the press to propaganda – only tyrants control the flow of information.

After I published my item, Dr. Katz received several unusually critical comments from readers in the comments section of his article. 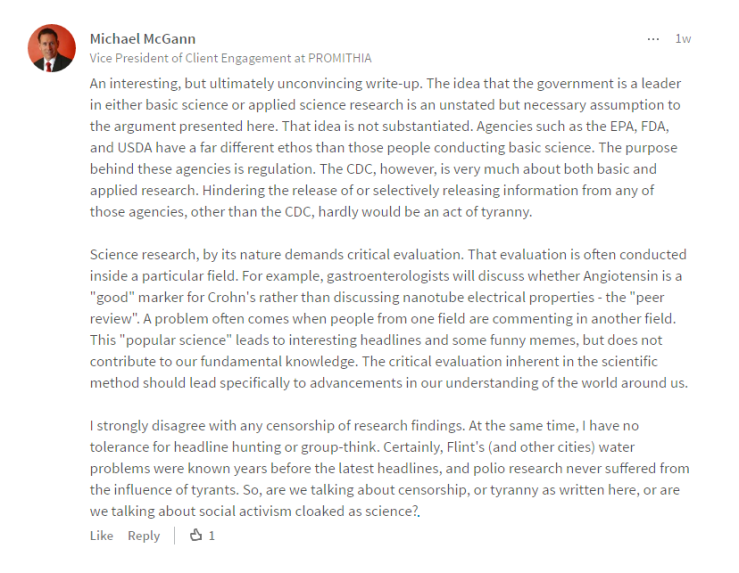 In a follow-up article, Dr. Katz addressed the backlash, stating he would not stop writing about politics:

Lately, I am hearing from friends and colleagues with prominent voices in health and medicine – in some cases voices much more prominent than my own – that members of their large following are advising them to stop talking about politics. Sometimes my friends tell me this directly; sometimes I see such commentary in their social media feed. I see it in my own, too, as well as my email inbox every day.

I am told, in essence: I am interested in what you have to say about health, but please just stick to that topic or I will stop following you. And indeed, weighing in about what I think matters most to our well being right now, I do see my Twitter following dip on occasion.

So be it. My answer, like that of the colleagues who command my respect, is no.

He also included the startling admission that he “[finds] it hard to care” about his patients’ health while Trump remains in office, and that as a credentialed MD, he believes Trump is “mentally ill.”

Honestly, I find it hard to care and counsel about the state of your colon or your coronary arteries while our democracy is self-destructing. Telling you why, or how to eat more kale at the moment feels a bit like arranging doilies on the Titanic. I think we should talk about the iceberg.

I needn’t tell you the particulars of what’s going on right now; you already know, or are living under a rock where this column won’t reach you either. But I can tell you what I think it means as a physician. I believe our president is mentally ill.

Paul Krugman is among those to have said this already, but Dr. Krugman is not a medical doctor. His PhD, like his Nobel Prize, is in economics- so his qualifications are suspect in this case. Mine are not, although I would readily defer to my colleagues in psychiatry. Still, I am qualified to say that paranoia, overt narcissism, and fixed delusions are bona fide mental illness.

It’s not the first time Dr. Katz has been criticised for “offering a diagnosis…by remote observation” to “express a political view.”

Providing no indication that he examined Wilfork or consulted his physician, Dr. Katz diagnoses Wilfork as “severely obese” and adds, “I very much suspect his health is a ticking bomb, and retirement will markedly trim the fuse.”

Here’s how the “internationally renowned authority on nutrition, weight control, and the prevention of chronic disease” says he arrived at those conclusions:

“Studies show that the ‘eyeball test’ differentiates fat from muscle nearly as well as fancy measures of body composition. Meaning no disrespect whatever to Vince, an especially perspicacious eyeball is not required to see that his health is in peril. There are plenty of images on-line; search them and see for yourself.”

See also: “Censorship and Science,” my January 27, 2017 item re: Author/journalist Nina Teicholz’s response to Dr. Katz’s concerns about “censorship of science” – she says “specious retraction efforts are also a form of censorship.”