— The HuffPost’s discontinued blogger platform was used to publish politically motivated fake news articles and unvetted opinion pieces. Here are a few of the most notable examples.

Last week, the HuffPost announced it was ending its contributor platform, which permitted anyone with a keyboard and an Internet connection to self-publish articles on the HuffPost website.

The decision to shutter the platform followed a story first published on this blog, and subsequently reported by The Daily Beast, about a now-deleted paid puff piece that was intended to burnish the reputation of former Donald Trump advisor Felix Sater.

Since its founding nearly 13 years ago, The Huffington Post has relied heavily on unpaid contributors, whose ranks included aspiring writers, citizen journalists and celebrities from the Rolodex of the site’s co-founder Arianna Huffington.

…On Thursday, it said it was immediately dissolving its self-publishing contributors platform — which has mushroomed to include 100,000 writers — in what is perhaps the most significant break from the past under its editor in chief, Lydia Polgreen…

[Recently] a contributor with the byline Waqas KH published an article about Felix Sater, an associate of President Trump, that he had been paid to post. The site has since deleted the article.

It’s not the only time the HuffPost has deleted a contributor’s fake news story. 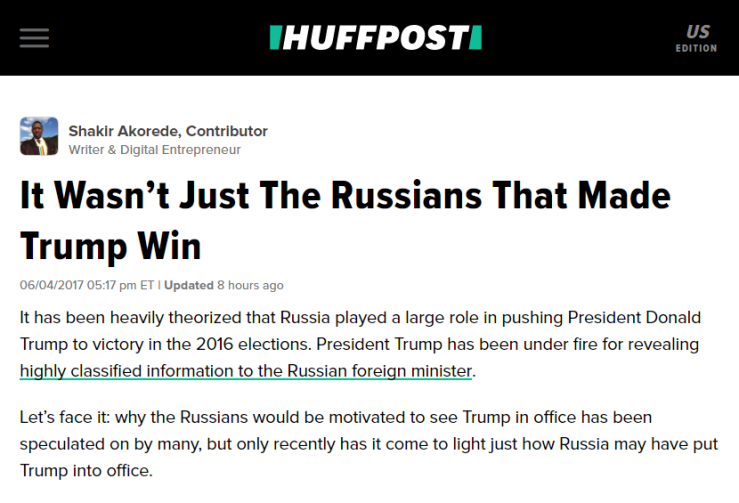 Via “It Wasn’t Just The Russians That Made Trump Win” by Shakir Akorede, HuffPost, June 4, 2017:

A private source from Trump’s campaign has leaked an invoice from Oak Park Alliance, a high-profile marketing agency specializing in digital marketing. Among the largest charges on the invoice is a $30,000 charge for “30 front-page posts — /r/the_donald.” Among Reddit users, “the_donald” is a well-known community that focused on championing Donald Trump throughout the campaign season. Also included on the invoice are several services, such as downvotes on subreddits supporting democratic presidential candidates, Bernie Sanders and Hillary Clinton, publications of high-profile articles, content creation, and one listed as “damage control.”

“It Wasn’t Just the Russians That Made Trump Win,” HuffPost contributor Shakir Akorede wrote on Sunday. Akorede alleged that “a private source from Trump’s campaign has leaked an invoice from Oak Park Alliance, a high-profile marketing agency specializing in digital marketing”…

But there is no public record of an Oak Park Alliance receiving a disbursement from the Donald Trump campaign in October 2016. What’s more, the memo misspells the name of the campaign (omitting the “for” in Donald J. Trump For President, Inc.) and only gives a P.O. box address for the Oak Park Alliance.

For a supposedly “high-profile marketing firm,” there is also no evidence of Oak Park Alliance’s existence outside of its barebones website, which was registered in 2014 and updated a week before the HuffPost blog post went live. The website was registered by Domain Protection Services, a service that registers domains on the behalf of clients who want to keep their identities anonymous.

— In May, the website deleted an article by H.A. Goodman, an anti-Hillary Clinton political pundit who perpetuated a debunked conspiracy theory that connected the unsolved murder of Democratic National Committee (DNC) staffer Seth Rich to the DNC e-mail leak of 2016.

Via “Why Is It Blasphemous for Kim Dotcom to Testify Under Oath in Congress?” by H.A. Goodman, HuffPost, May 26, 2017:

Because I respect The Huffington Post, I’ll keep this piece short, and to the point; nobody is claiming anyone caused the death of Seth Rich.

On the other hand, more information on Seth Rich’s death is needed.

If indeed Seth Rich was the WikiLeaks source, we need to know, or at least evaluate added evidence. It’s unheard of to simply disregard new evidence, or prevent a witness from testifying under oath, even in “botched robbery” cases…

Again, I’m not claiming anyone in particular killed Seth Rich.

What I’m saying is new evidence, or the possibility of new evidence is vital to finding out what happened to Seth Rich.

Seth Rich was shot and killed on 10 July 2016 near his home in Washington, D.C. in what Metropolitan Police Department (MPD) investigators believe to have been a botched robbery, due to a string of similar crimes in his neighborhood at that time. In an e-mail, MPD confirmed that is still the suspected motive:

At this point in the investigation, it is believed that Seth Rich was the victim of an attempted robbery. MPD does not currently have evidence to suggest otherwise; should anyone be in possession of such evidence, they are urged to turn it over to the police.

There is no evidence to date that thousands of e-mails were found on Rich’s computer linking him to WikiLeaks, or that he was killed as part of a conspiracy or coverup.

— In November, the website deleted an article by contributor David Fagin, who perpetuated false claims that a now-infamous photo of Al Franken, in which the former senator appeared to grope radio broadcaster Leeann Tweeden while she slept, had been staged.

Via “The Framing of Al Franken by Two Trump Supporters; and the Dems Are Playing Right Along” by David Fagin, HuffPost, November 17, 2017:

Leeann Tweeden, a former Playboy Playmate who’s spent half her life nude, or nearly nude, and the other half appearing on shows such as Hannity, also just happens to be a Trump supporter, as well. Isn’t it interesting how she’s decided to share her nightmarish tale of horror and humiliation in the form of an unrequited kiss on behalf of a liberal-leaning Senator with us, now?…

[The] photographer who took the photo in which Franken is supposedly ‘groping’ Tweeden while she sleeps says it was staged and that she wanted him to do it. Granted, this could be a Facebook hoax, or another bit of fake news, but if it’s true…

The person who took the picture of Al Franken and Leeann Tweeden has not been identified, nor have they issued a statement regarding the incident. Which means there is no credible claim the image was staged, that Tweeden was “playing dead,” or that “she wanted him to ‘revive’ her” in the picture. This quote was made up out of the whole cloth in an apparent attempt to discredit Tweeden and her account.

— In February 2017, the website deleted an article by René Zografos, a Norwegian photographer who said he agreed with Trump’s closed-border view on immigration and that Sweden’s open-door immigration policy had caused crime rates to rise in that country.

Via “Trump is Absolutely Right About Sweden” by René Zografos, HuffPost, February 22, 2017:

Many journalists around the world are eager to condemn Donald Trump no matter what. When he tweeted about immigration in Sweden few days ago, the social media exploded. Most of the opponent said that Trump has made up the immigration problem Sweden have. They are wrong.

Only hours later there was a riot of violence and destructions by immigrants in the capitol of Sweden, Stockholm. The police was forced to shoot with ammunition to put and end to it. In Malmö, another city south in Sweden they have struggle with gang violence and lawlessness for years. So when Trump talk about that Sweden have an immigration problem he is actually spot on.

It’s well known for Scandinavians and other Europeans that liberal immigration comes with drugs, rapes, gang wars, robbery and violence. Additional to that we see the respective nations cultures fading away, for good and for bad.

Via “Riot Breaks Out in Immigrant Suburb of Stockholm, Sweden” by David Emery, Snopes, February 22, 2017:

Days after President Trump referenced a nonexistent instance of immigrant violence in Sweden, a riot broke out in a predominantly immigrant district of Stockholm…

Sweden has long been in the forefront of European countries accepting refugees from elsewhere in the world, prompting those opposed to open-door immigration policies to claim the influx of foreigners has caused crime rates to rise in the country. The actual statistics don’t bear that out, however. Despite a sharp increase in the number of asylum seekers in 2015, an analysis cited by the Washington Post found that fewer than one percent of all crimes in Sweden during the final three months of 2015 were committed by refugees.

— In June, the website deleted an article by contributor Jason Fuller, who called for the prosecution and execution of Trump for treason. 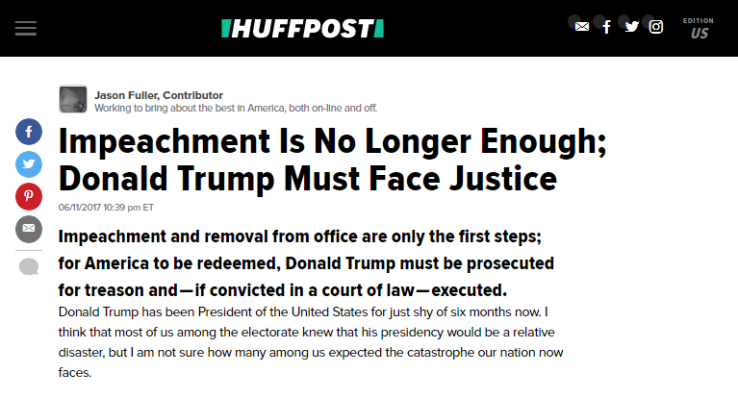 Via “Impeachment Is No Longer Enough; Donald Trump Must Face Justice” by Jason Fuller, HuffPost, June 11, 2017:

Impeachment and removal from office are only the first steps; for America to be redeemed, Donald Trump must be prosecuted for treason and — if convicted in a court of law — executed…

[The] interference of the Russian government to circumvent our democratic procedures for electing the President of the United States is an act of war. There is no other way to characterize it; this was an all-out attack by the government of Russia on our democratic process, the very foundation of our country. This elevates Trump’s simple obstruction of justice to high treason under the Constitution.

Via “HuffPo Pulls Article Calling For ‘Ultimate Punishment’ Of Trump” by Will Ricciardella, The Daily Caller, June 6, 2017:

Fuller’s “ultimate punishment” is not only reserved for the president, but also for “everyone assisting in his agenda,” including Republican Reps. Mitch McConnell and Paul Ryan and White House strategist Steve Bannon. Fuller claims that “all must face justice” by being tried, convicted and ultimately executed for treason…

In light of the shooting of Majority Whip Steve Scalise, two Capitol Hill police officers, a congressional staffer and a lobbyist, concerns about over-the-top political rhetoric are at an all time high.

If you visit the link where his diatribe used to be on HuffPost, you’ll receive the message that “this post from The Huffington Post Contributor Platform is no longer available on our site.” You can recover the cached version here.

As of publication, the HuffPost’s contributor platform is still available in Canada and the U.K.