Simon Chesterman, the UK’s national police lead for armed policing, has defended the use of tasers against children in a tweet today.

Commenting on an article published yesterday by The Justice Gap about a recent increase in police use of tasers against children, Chesterman tweeted: “Police ‘threatened children with Tasers’. Important to understand what were these children doing at the time?” 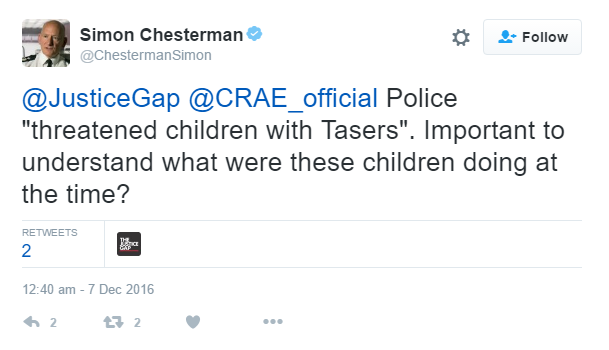 It isn’t the first time Chesterman has defended the use of tasers.

In 2013, he claimed that the risk of tasers inducing cardiac arrest was “very low,” and that there was no need for police to “adjust our point of aim” away from the chest area.

His comments came after an independent review by the now-defunct Association of Chief Police Officers (ACPO), which concluded that the use of tasers carry “no substantial risk.”

However, the eminent US cardiologist Dr. Douglas Zipes, who in 2012 published a study exploring the dangers of chest shots, has advised against the use of tasers. As he told the Guardian in 2013: “My admonition would be avoid the chest at all costs if you can.”

There have been at least 17 deaths linked to the use of the stun guns since they were introduced in 2003.