For the past month I’ve been blogging about a new anti-US media campaign started by the Internet Research Agency (IRA), better known as the Russian troll factory.

In April, my post about the campaign’s recruitment of “English-speaking journalists” was picked up by The Daily Beast, Taegen Goddard’s Political Wire, and Press Pool with Julie Mason.

Then late last month, I scooped the story that the IRA is planning to flash mob the White House on June 14, Donald Trump’s 72nd birthday, as part of the new campaign.

WASHINGTON—A new Russian influence operation has surfaced that mirrors some of the activity of an internet firm that the FBI says was deeply involved in efforts to sway the 2016 U.S. elections, a cybersecurity firm says.

A website called usareally.com appeared on the internet May 17 and called on Americans to rally in front of the White House June 14 to celebrate President Donald Trump’s birthday, which is also Flag Day.

The website’s operators once worked out of the same office building in St. Petersburg, Russia, where the Kremlin-linked Internet Research Agency had its headquarters, said Lee Foster, manager of information operations analysis for FireEye iSIGHT Intelligence…

Russians involved in the website work for the Federal News Agency, which is known by its Russian acronym FAN and closely follows the Kremlin line on international issues. Ownership of the agency is not publicly known.

Meanwhile, the USA Really campaign is steadily picking up traction, with over 400 Twitter followers within a few days, and a perfect Twitter audit score. 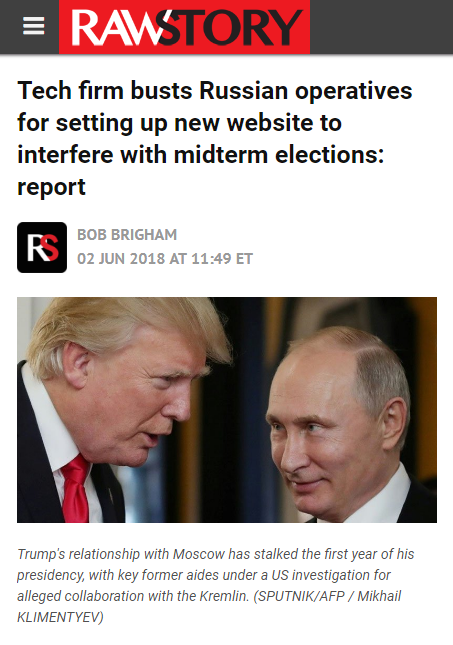 Russian operatives with ties to a notorious “troll factory” under indictment by special counsel Robert Mueller may be preparing to launch an influence operation to interfere in the 2018 U.S. midterm elections, McClatchy reports.

Speaking at the end of the Fifth Annual Government Forum on Cyber Threat Intelligence, researchers at the cybersecurity firm FireEye warned of a new effort that mimics the information warfare campaign that U.S. intelligence has concluded Russia conducted to help Donald Trump during his successful 2016 presidential campaign.

FireEye, which was a sponsor of the conference, warned of a new website, usareally.com, that appeared on the internet on May 17. The site has posted an average of nine articles a day, in broken english.

On May 25, the website teased that their “USA Really” campaign would officially launch on June 14.

“June 14th isn’t just Trump’s birthday. It’s not just Flag Day, either,” the post read. “This is the day when we officially launch our project, ‘USA Really’, which is an honest media outlet that tells you what’s really happening in America.”

“Our slogan is ‘The USA As It Really Is!’ We invite everyone who care (sic) about America to come and celebrate with us outside the White House on June 14th at 2pm to congratulate the rest of the country on this triply important day,” the post continued.

“We’re all patriots, and we all want everyone else to finally wake up!” they added.

The researchers at the cybersecurity firm warned the website’s operators once worked out of the same St. Petersburg “troll factory” known as the Internet Research Agency. Special counsel Mueller indicted the company on February 16.

“We’re not saying it (USA Really) is the Internet Research Agency but there are a number of indicators that suggest it is,” said Lee Foster, manager of information operations analysis for FireEye iSIGHT Intelligence.

The Russian operatives behind the website reported work for the Federal News Agency (FAN), whose ownership is unknown.