In 2013, the site shut down after an investigation by the Federal Trade Commission determined Brittain had hosted fake lawyer advertisements on the site in order to trick victims into paying hundreds of dollars to have their photos removed.

Last week I was contacted by communications expert/social media strategist Brian O’Neal, who sent me a copy of a “profanity-laced” Facebook message he claimed he received from Brittain after O’Neal unfriended Brittain on Facebook.

When I attempted to verify the authenticity of the vituperative message with Brittain’s company via Facebook, here’s what happened:

Dean: Hi, my name’s Dean, I’m a blogger. Recently I got an e-mail from a communications executive named Brian O’Neal who said you sent him a “profanity-laced” Facebook message because he unfollowed your Dryvyng page. For an item on my blog, could you comment on O’Neal’s claim? Cheers – Dean

: Thanks for contacting Dryvyng. Someone will be with you shortly! Thank you!

: No one at Dryvyng has ever spoken to or heard of him. Best regards.

Dean: He sent me a screenshot.
Dean: I’ll send in a minute.

: Screenshots can easily be faked. People have agendas. We have never heard of or spoken to that person.

: Lots of people recently have fabricated conversations involving supposed members of our company. It is a common trend. 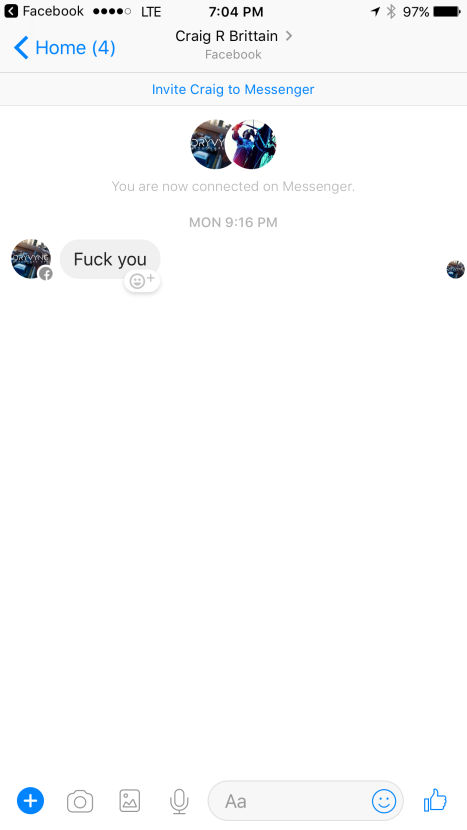 : Looks like an impostor. Many people impersonate our CEO and send random messages. The only official accounts that represent our brand are this one and Craig’s verified account. Unverified accounts are impostors.

Dean: It appears to have been sent from this group account managed by Craig Brittain: https://www.facebook.com/groups/1634585306815040/admins/?ref=group_cover

: Only pages and users can send messages. Any user account/page without a verified tag is not one of ours.

Dean: Apologies, I’m not up to scratch with Facebook’s messaging system, but it’s my understanding that you can reply to direct messages as admin.

Dean: Cheers, thanks for answering my questions.

Dean: Also, mind if I ask who I’m talking to?

: This is Doug Childs, PR rep for Dryvyng.

Dean: Rechecked and apparently the message was sent from Craig R Brittain’s account, not the group account. Did you ask Craig if he sent this?

: Any account that does not have the verification checkmark is not one of our accounts.

Dean: Just to clarify, this account does not belong to Craig R Brittain: https://www.facebook.com/craigbrittainbackup?ref=br_rs

: It is not one of our accounts.

Dean: Do you have any idea why people might be creating fake accounts for Craig?

: There are many people with political agendas and many fake news websites that want to generate clicks.

: As a top 3 company in a competitive field we face a lot of media adversity from the fake news which is why we haven’t received more positive coverage.

: They know the fake news will print whatever they want people to believe, so they fabricate stories and/or engage with unverified accounts and report it as fact.

Dean: Again, thanks for answering my questions. One last thing: do you have a link to a website or online profile for your PR services?

: I work specifically for Dryvyng. Dryvyng is my only client.

Dean: Do you have any online presence at all that I can link to?

: Charles Peralo is a known hoaxer and scammer who is also a legitimate political opponent of our CEO.

Dean: Do you have any evidence for these claims and could you provide links please?

: Craig Brittain is currently the frontrunner to become the Libertarian Party Presidential nominee in 2020.

Dean: I didn’t know he was part of the libertarian party.

: There is no need to prove Peralo is uncredible. He has failed to prove that he is credible.

: No one has ever seen anything Peralo has done or even verified that any of his work exists. We are verified and thus credible via verification.

: Not a credible or notable source. A fake.

: Lots of these fake experts hoax in order to get attention.

: That is how fake news works. The mainstream media does it in almost every story and the bloggers copy the formula.

: 99% of all news is fake and can be dismissed as such

: Made up to keep people believing whatever they want to believe.

: It is easy to understand why Mr. Peralo is jealous of Mr. Brittain’s success.

Dean: I’ll certainly ask him about this. Cheers

: Brittain’s verified Facebook page gets up to 1m impressions and tens of thousands of engagements per day

: Dont ask him, he isnt credible.

: Why would you ask a noncredible person what they think? Ask someone with credibility

: A long list of credible people and celebrities support Brittain. They have affirmed his greatness.

: Dont print fake news about randos that nobody cares about, print real news about all the great people that support us.

: You havent even asked about our company at all so it is clear you aim to print fake news.

Dean: His Twitter account only has thirty plus followers but his Being Libertarian account has almost 5k. I simply got a tip from Brian O’Neal and I’m following up.
Dean: Thanks for answering my questions.

: You didn’t get a tip from anyone. You have a personal connection to Brian O’Neal and you are acting on his behalf to print fake news.

Popehat and techdirt publish articles based on my blog post about “revenge pornster” and Dryvyng CEO Craig R. Brittain re: DMCA takedown requests

Thanks to Dean Sterling Jones at Shooting The Messenger, I see that the demented and easily enraged Craig Brittain has returned to his habit of ineffectual gestures at censorship.

Craig will be Craig. But will he be Craig, free and in the wild forever? The wheels of justice grind slowly — but remember that they do grind, my friends. To the extent that Craig’s continued existence as Craig is not the most brutal consequence a cold universe can inflict upon him, Craig will encounter justice sooner or later.

Popehat reports Brittain has apparently learned nothing from his last Streisanding. Brittain is once again issuing bogus takedown notices — this time on behalf of his alt-right ride-sharing pipe dream, Dryvyng. (Pronounced “dryheaving.”)

…It’s this “company” that Craig has issued the DMCA notices for. Apparently, he’s none too thrilled at the lack of positive press for his hypothetical ride-sharing startup and has once again asked Google to delist all sorts of things he has no business asking to be delisted. Dean Jones of Shooting the Messenger is the person who originally discovered a handful of notices sent by “Dryvyng,” all of which feature petulant commentary not normally found in legal paperwork.

…In every case, the accusation is internet libelslander, which can’t be touched by DMCA notices. The reason is in the name of the notice itself: Digital Millennium COPYRIGHT Act. But when you’re angry at the internet, any fill-in-the-blank form will do. Even if Brittain had used the proper paperwork, Google would be under no obligation to delist the alleged slander, thanks to Section 230 of the CDA.

It’s no surprise Brittain’s attempt to pass himself off as David Blade, Esq. went so badly. He obviously has zero legal acumen. If you’re going to beclown yourself with bogus notices, at least try to do so somewhat competently. Sure, the outcome won’t change, but at least you won’t look like even more of an idiot than you already do.

You can read my April 6, 2017 blog post about Brittain by clicking here.

Citing US copyright law, the complainant asked Google to “permanently remove” articles by Business Insider, Fusion, and Wikipedia, on the basis that they allegedly include “slanderous, libelous and deliberately misleading” information “designed to defame and libel me and my company.”

The complainant also requested that Google remove “all of Wikipedia itself,” describing the online encyclopedia as “a left-wing hive for slander and libel.” 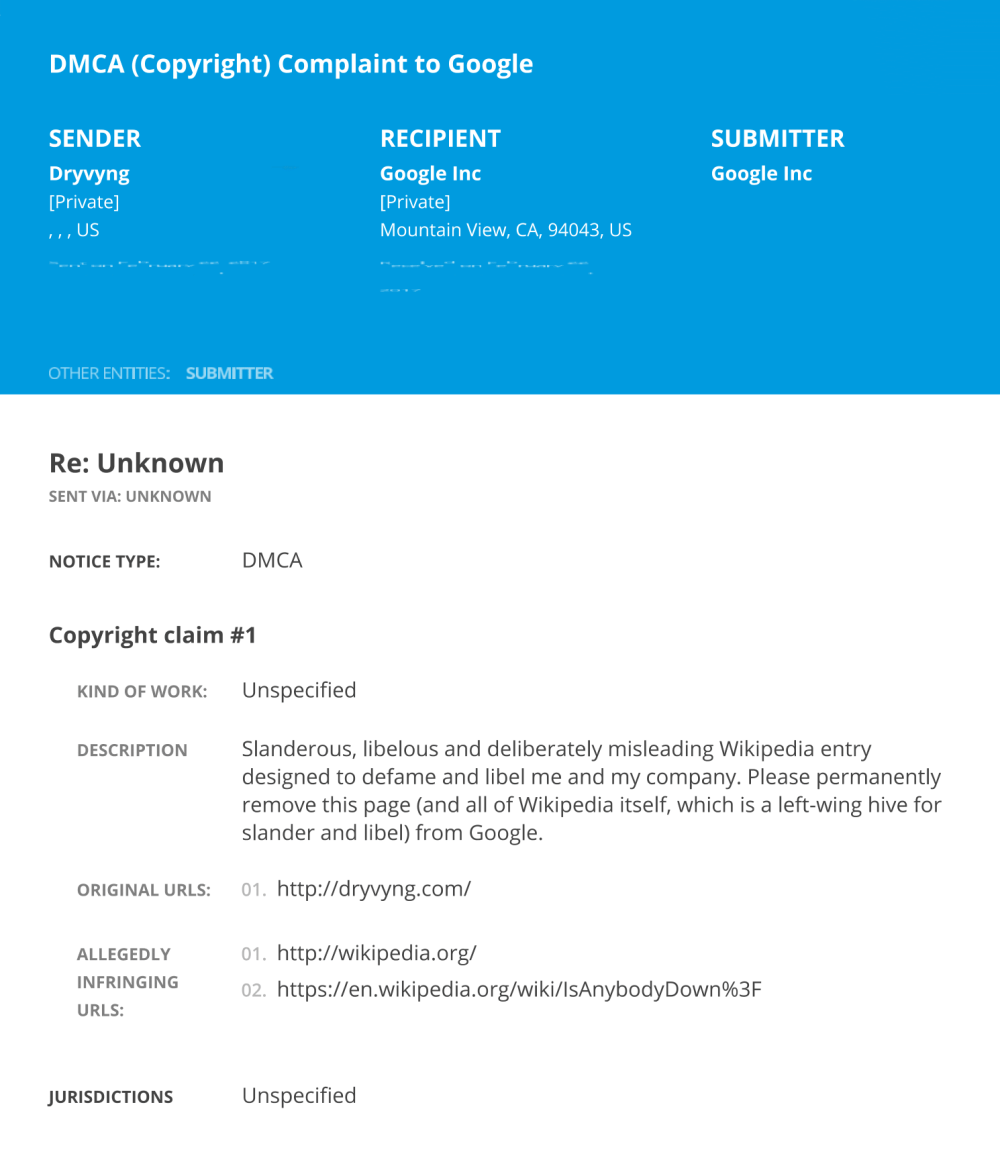 IsAnybodyDown? was founded in 2011 by Dryvyng’s CEO Craig R. Brittain. The controversial site encouraged users to anonymously submit non-consensual nude photos along with identifying information about the person in the photos, including their full name, home address, and Facebook screenshots.

In 2013, the site shut down after an investigation by the Federal Trade Commission determined Brittain had hosted fake lawyer advertisements on the site in order to trick victims into paying hundreds of dollars to have their photos removed.

I wasn’t able to confirm Brittain filed the takedown requests as he didn’t reply to my request for comment, however I did get a reply from criminal defence/First Amendment attorney Ken White, co-founder of the Popehat blog.

This item has been revised to emphasise I was unable to get a reply from Brittain to confirm he sent the takedown requests.