Last week, I blogged about Caputo’s attempts to purge Wikipedia of evidence that he helped promote Russian President Vladimir Putin in the United States. 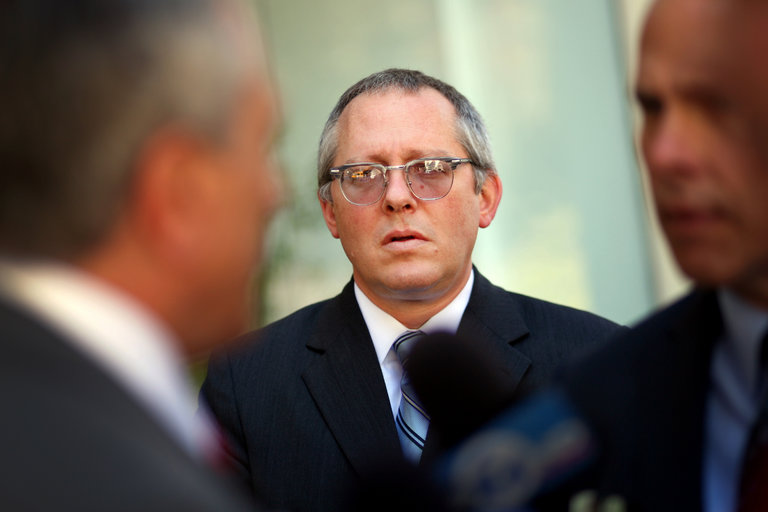 Today, Wikipedia invited Caputo “or anyone in politics” to “come to one of our DC editing events to learn how to use Wikipedia properly.”

From this tweet, it appears that Caputo has accepted the invite:

Former Donald Trump campaign aide Michael Caputo is determined to prove that he did not work for Vladimir Putin, and he’s using every tool at his disposal to do so—from a congressional ethics complaint, to a defamation lawsuit, to a surreptitious Wikipedia edit campaign.

Sean Dwyer, an employee of Caputo’s PR firm, Zeppelin Communications, was blocked from Wikipedia in August after he was caught using multiple pseudonymous accounts to purge Caputo’s page of alleged Putin ties, according to an investigation by the site’s editors. After the accounts were exposed as what Wikipedia calls “sock puppets”—multiple accounts run by the same person as part of a coordinated editing campaign—Dwyer admitted he had financial ties to the subjects of his edits.

Given what Caputo characterizes as widespread—and even malicious—misrepresentations of his work in Russia, “Wikipedia inaccuracies barely even make it on my radar,” he said.

And yet, Dwyer’s editing campaign, which was first reported by independent blogger Dean Sterling Jones, shows that Caputo was at least aware of the claims and determined to purge them. Dwyer did so through four different “sock puppet” accounts, according to Wikipedia’s investigation, and edit logs show he repeatedly attempted to remove language from the page that tied Caputo’s work for Gazprom to any efforts to burnish Putin’s reputation abroad.

Though it’s fairly common, “sock-puppetry is one of the cardinal sins of Wikipedia,” according to William Beutler, the president of digital marketing firm Beutler Ink and a longtime personal and professional Wikipedia editor. “We do this legitimately every day. But our approach is different from what they do here,” Beutler said in an interview. Unlike Dwyer, “we disclose who our clients are at the starting point.”

I deny all accusations that I live in my mother’s basement.

After Politico profile about “amateur sleuths” highlights—count `em—three Shooting the Messenger Trump scoops, Donald J. Trump-affiliated lawyer Jordan Sekulow tells Fox News that I and other independent researchers are “wasting all of their time”

This week I was featured in a Politico profile about “self-assigned Bob Muellers” who are doing independent research into Donald Trump’s Russia and business connections.

The article, by Darren Samuelsohn, highlighted three stories first published on this blog. One of them, that Donald J. Trump’s former business partner Tevfik Arif tried to scrub details of his arrest (and later acquittal) for human trafficking from the Internet, was picked up by The Daily Beast last month.

The article also mentioned that I’d “documented Wikipedia editing records that show how Felix Sater, a Russian-born real estate developer and Trump business partner, may have used a pseudonym to delete information about his criminal history from Trump’s Wikipedia page,” and that I’d “identified about a dozen posts written under Trump’s name on his now-defunct Trump University blog that appeared to plagiarize content from news outlets including CNN, USA Today and The New York Times.”

Shortly after Politico’s article, Jordan Sekulow, director of the American Center for Law and Justice and the son of Jay Sekulow, Trump’s legal adviser during the Mueller investigation, appeared on Fox News to denounce me and the other featured researchers—including Brooke Binkowski, managing editor of highly respected fact-checking website Snopes—without disclosing his ties to Trump.

Here’s the clip, plus excerpt:

Sekulow: I think it’s wonderful that these people who are – who want to bring down the president – are wasting all of their time and money to do so. I don’t even think the special counsel is going to be able to find anything on the president, so good luck to these sleuths who are, again, spending all they’ve got to try and bring this president down. It does underscore, though, just how much hatred there is out there for this President of the United States, who was elected so overwhelmingly by the American people.

To which I say: If a part-time blogger like me with zero resources can locate and publish the kind of damning info I have on Trump, I can only imagine what the Mueller investigation is turning up!

For the record—savvy cat that I am—I found my scoops without spending a single penny.

The Daily Beast picks up my story about Turkish court-ordered takedown requests by Trump’s Bayrock business partner Tevfik Arif re: his 2010 arrest in prostitution sting

Via “Trump’s Business Partner Tries to Erase his Prostitution Bust From Web” by Lachlan Markay, The Daily Beast, July 21, 2007:

Meanwhile, this Kazakh-born real estate mogul, Tevfik Arif, is doing his best to clean up his past, trying to purge the web of references to his arrest in an underage prostitution bust. He was later acquitted in the matter.

Arif, a former Soviet trade minister whose company once prospected for the Trump Organization in Russia and Eastern Europe, has demanded the removal of allegedly defamatory information about that arrest from websites that have investigated or recapped controversies involving some of President Donald Trump’s past business associates.

Some of those associates are now of keen interest to Justice Department special counsel Robert Mueller and his team of investigators probing Russian influence in the 2016 election and the Trump campaign’s knowledge of it. According to a Thursday report from Bloomberg, Mueller is examining the finances of a Trump project involving the investment firm Arif founded.

Since May, [Arif] has sent four takedown requests to Google and one to Automattic, the owner of popular web publishing platform WordPress, demanding that they remove content from websites hosted by their respective companies that Arif claims is defamatory. Each complaint contained documents from Turkish court orders requiring the removal of similar web content. The takedown requests were first reported by the blog Shooting the Messenger.

A January 2016 post on one of the WordPress-hosted websites at issue claims that Arif was “charged with smuggling underage girls into the country for prostitution” and “accused of being the organizer of an international ring involving young girls.” It does not note that the charges were dropped.

Automattic partially complied with the request and blocked access to the website in Turkey, the company told The Daily Beast. Paul Sieminski, Automattic’s general counsel, said it risked the country’s government blocking access to all Wordpress-hosted sites if it failed to comply.

“This is not a decision we take lightly, but in our experience, failing to comply with a court order of this kind results in the blocking of all of WordPress.com, in Turkey—which removes the site in question, plus the millions of other sites that we host,” Sieminski wrote in an emailed statement.

Google did not respond to requests for comment on the takedown notices, though the websites listed in Arif’s complaint are still accessible from a US IP address. Efforts to reach Arif were unsuccessful, and Bayrock did not respond to questions.

Read my original posts by clicking here and here.