In March, the paper falsely reported that WikiLeaks founder Julian Assange was accused of raping two men during a 2010 visit to Sweden.

On my request, the paper corrected the error and added this note to the enclosing article: “A previous version of this story said that Assange had sex with two men who later accused him of rape. In actual fact they were women. The story was corrected on 10th March.”

Shortly after the correction was published, the article was heavily revised and the original reporter’s name replaced with the name “Eileen Weybridge.”

However, when I called the Sun’s personnel department I was told they had no records of anyone with that name.

After failing to get answers from the editor who made the correction, in May I blogged the story with the sub-heading, “Did The Sun newspaper create a fake reporter?” which I then sent to Assange with a request for comment.

Although Assange didn’t respond directly, he tweeted this…

…after which the story was picked up by the libertarian-leaning Free Thought Project and shared by a number of fringe conspiracy sites including that of British conspiracy theorist David Icke, who claims that the Queen is a shape-shifting lizard.

One YouTuber, speculating about the Sun’s initial reporting error, said he believed the U.S. Central Intelligence Agency had planted the male rape claim to smear Assange.

Ironically, in March I’d joked that British authorities had planted the false claim to coax Assange out of self-imposed exile because if he were convicted of raping two women it would end any rumours about his sexuality. 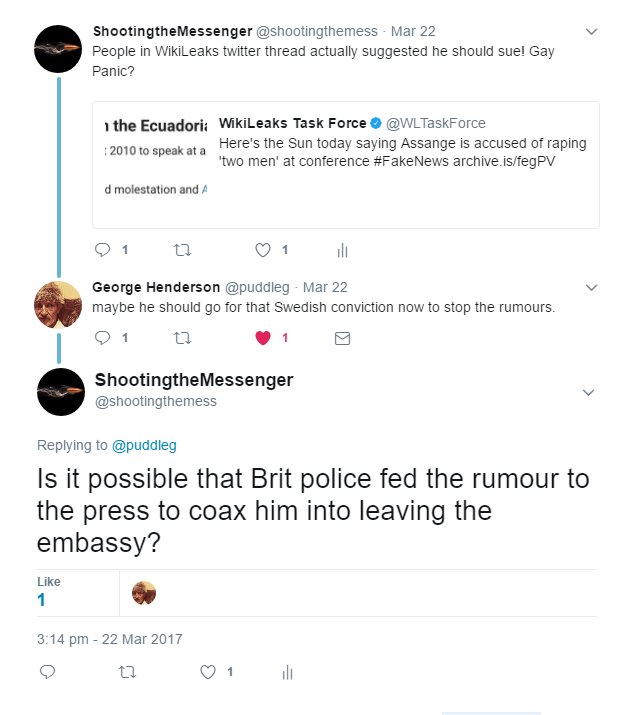 To read more about how this strange story developed, click here, here, and here.

*Poe’s Law: An internet adage which states that, without a clear indicator of the author’s intent, it’s impossible to distinguish satire from the real thing.