— Did someone from Betsy DeVos’ investment firm try to scrub unfavourable information about members of the DeVos family from online bio?

Last month, I blogged that former Trump campaign aide Michael Caputo paid an employee from his own PR firm to scrub Wikipedia of references linking him to Russian President Vladimir Putin. The story was picked up by The Daily Beast, and subsequently covered by The Washington Post.

Now I think I’ve found another one.

According to Wikipedia editing records, it appears that someone from Education Secretary Betsy DeVos’ private investment firm, Windquest Group, attempted to delete unfavourable information about members of the DeVos family.

DeVos was chairman of the firm at the time the edits were made in August 2015 by Wikipedia user “WindquestGroup,” who was subsequently banned indefinitely because the “account’s edits and/or username indicate that it is being used on behalf of a company, group, website or organization for purposes of promotion and/or publicity.” 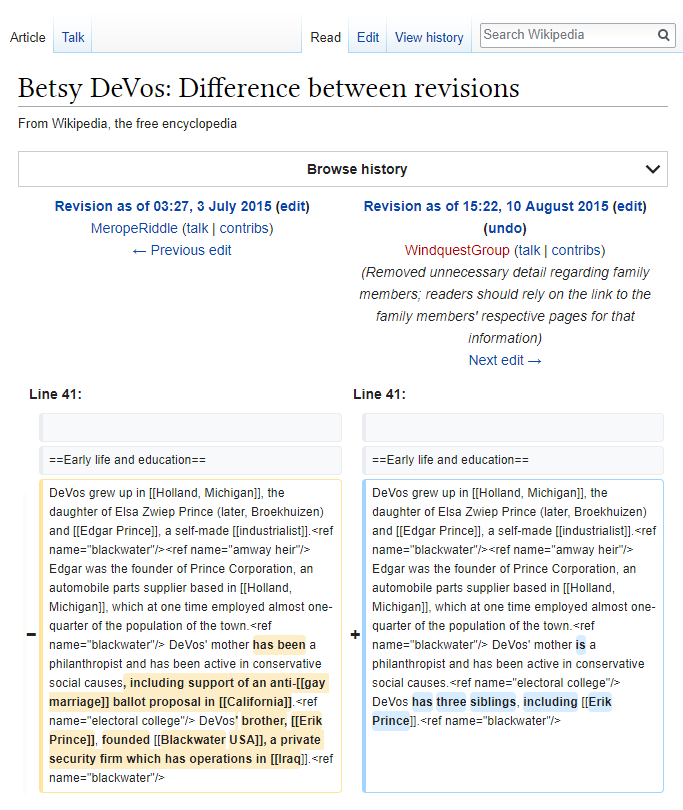 The Blackwater founder is currently facing scrutiny “over reports that he met the head of a Russian investment fund in an apparent effort to set up a back channel for Russian communication with the Trump administration, and that senior Trump officials had authorized the meeting,” according to CNN.