“There’s no excuse for blurring the boundaries between rigorously researched scientific work and pseudoscientific claims about unproven quack cures.” Read BuzzFeed UK’s superb article based partly on my investigation of freaky US alt-med organisation

For the past year I’ve written extensively about the International Meta-Medicine Association (IMMA), a US integrative medicine organisation that teaches the widely discredited theories of Ryke Geerd Hamer, a notorious German ex-doctor who lost his medical licence in 1986 after a number of patients in his care died.

IMMA was founded in 2004 by Johannes Fisslinger, inventor of the “Aura Video Station.” According to IMMA Master Trainer Richard Flook, Fisslinger is a former student of Hamer. Hamer’s Canadian representative Ilsedora Laker has even accused Fisslinger of plagiarising Hamer’s work.

Last year, I interviewed Fisslinger about reports that three or more cancer sufferers died after being advised by IMMA practitioners to abandon conventional treatments. Fisslinger said the conduct of practitioners Dagfrid Kolås and Bent Madsen, both former members of IMMA’s Advisory Council, was “absolutely irresponsible” and “absolutely unacceptable.”

Fisslinger recently started the Lifestyle Prescriptions Foundation, an integrative medicine organisation which, like IMMA, teaches the discredited theories of the notorious Hamer. 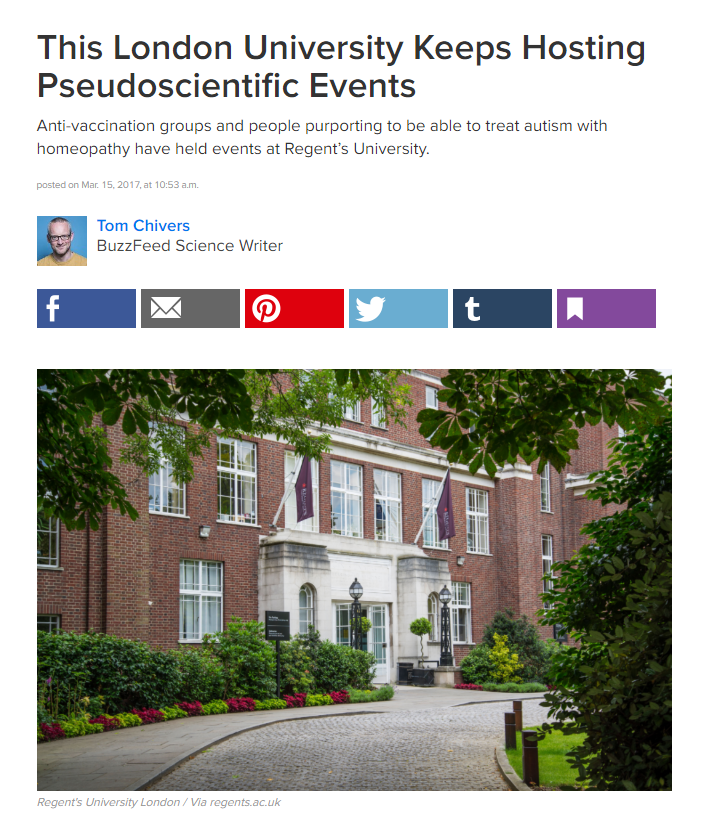 Regent’s University London, an independent university and registered charity, has allowed its premises to be used to host a series of events and programmes which promote “pseudoscientific” treatments.

A member of the House of Commons science and technology committee told BuzzFeed News that any universities “lending their good name” to such events risked giving credibility to “unproven quack cures”.

On Saturday, Regent’s leased space for a conference by Lifestyle Prescriptions (LP). Proponents of “lifestyle medicine” claim on the LP website to teach people how to “stop or reverse” cancer and other illnesses. Practitioners of another health programme linked to LP’s founder have been blamed for the deaths of three cancer patients in Norway who stopped taking conventional treatments.

…Lifestyle Prescriptions was founded by Johannes Fisslinger in 2016; on its website, practitioners of the “lifestyle medicine” it promotes claim to be able to teach how to “prevent and heal diabetes, heart disease, obesity, autoimmune disease, cancer and many other health issues”, and a practitioner claims to be able to “heal cancer”.

Science reporter Tom Chivers (previously the Assistant Comment Editor for British broadsheet newspaper The Telegraph) did a fantastic job reporting about the foundation’s weird but not-so-wonderful background, including getting some revealing comments from Fisslinger.

Fisslinger denies that LP promotes any treatments, says LP is not based on meta-medicine, and says it is “totally irresponsible” to tell patients to stop any conventional treatment. He said “it’s a scientific fact that traumatic life events and negative emotions affect our health – nobody would deny that”. He also says he has not been involved with IMMA for several years.

There’s lots to debunk here, starting with Fisslinger’s claim that his foundation does not promote any treatments.

Per the below excerpt from the university’s lengthy three-part “Meta-Health Therapy Plan,” students give advice intended to benefit patients’ mental, physical (including their “organ & energy” health) and social well-being. Recommendations range from benign platitudes such as “follow your heart,” to advice regarding emergency medical treatment.

Fisslinger’s claim that Lifestyle Prescriptions is not based on meta-medicine is easily debunked via the university’s website, which clearly states that students “will be accredited by the Intl. META-Medicine Association, which is the worldwide standards and certification organization for META-Health [ie. Lifestyle Prescriptions] Professionals and Trainers.”

The claim that traumatic experiences can negatively affect health isn’t controversial. However, Fisslinger’s foundation goes much further, asserting that specific emotionally traumatic experiences correspond with specific physical symptoms. For instance, Lifestyle Prescriptions practitioner Annie Gedye claims she treated a woman who developed swollen lymph nodes upon discovering her boyfriend had cheated on her. Gedye’s interpretation is that the woman had experienced psychological trauma and literally became unable to swallow the information.

As for Fisslinger’s claim that he has not been involved with IMMA “for several years,” not only does his foundation’s university website state a clear connection to IMMA, Fisslinger himself is listed as being IMMA’s designated Agent for Process on the organisation’s December 2016 Statement of Information declaration to the State of California. 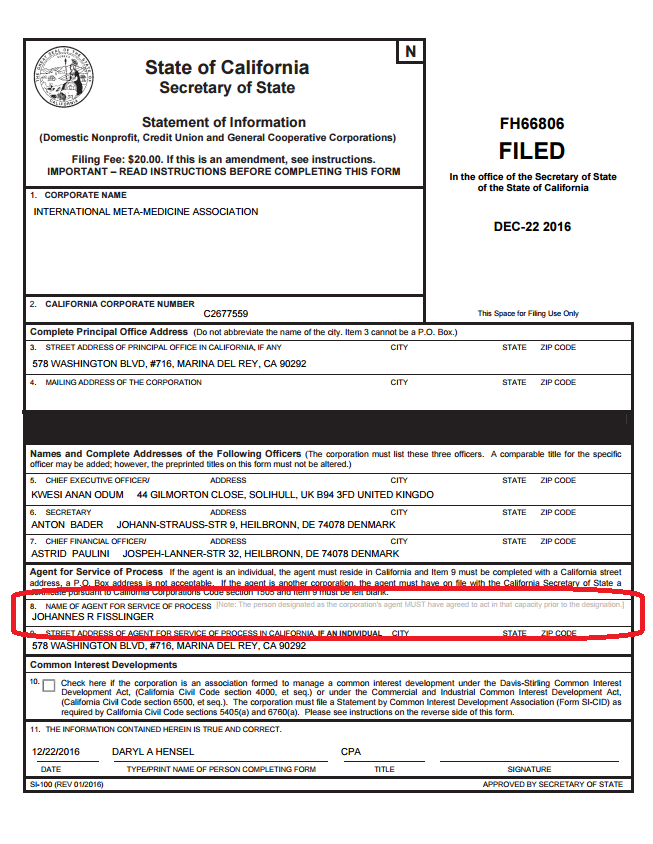 Via Chivers’ article, Fisslinger says he will “personally distance” himself from “anyone claiming to heal any diseases, especially cancer,” and said “lifestyle medicine is helping people to be healthier”:

“We make it very clear to anyone using Lifestyle Prescriptions to follow the legal requirements for their profession, and especially always work with their local doctor and never tell or even suggest clients stop any form of treatment or making any claims to heal anything.”

He added: “It’s not about treating something, but rather prevention and healthy living.”

Chivers’ article also includes incisive comments from Matt Warman, MP for Boston and Skegness and a member of the House of Commons science and technology committee:

[Warman] told BuzzFeed News: “Universities, private or otherwise, should take care when promoting or lending their good name to events which promote scientifically unfounded claims, as the use of their premises can add legitimacy to such claims and may serve to mislead attendees or observers.

“There’s no excuse for blurring the boundaries between rigorously researched scientific work and pseudoscientific claims about unproven quack cures.”

Last year, I asked Dr. Katz about his years-long association with Fisslinger/meta-medicine, and the damaging claim made by German blogger Aribert Deckers that by speaking at the 2013 Meta-Health Summit he was supporting “a lethal cancer fraud.”

Dr. Katz insisted that outside of his 2013 talk, he “has no relationship with any of these people and have never endorsed any program or product of theirs.”

When I asked Dr. Katz if he profited from the sale of videos of his 2013 talk, which were being sold via the Lifestyle Prescriptions TV website at a price of ninety-seven dollars per year, he called me a “cartoon character” and accused me of harassing him.

Click here to read more about IMMA and Lifestyle Prescriptions.