The complaint, in the form of a court order, requested that WordPress restrict access to a Turkish blog page featuring satirical cartoons depicting Erdoğan as a tyrannical dictator, claiming they constitute “an attack on personality rights” and do not “reflect reality.” 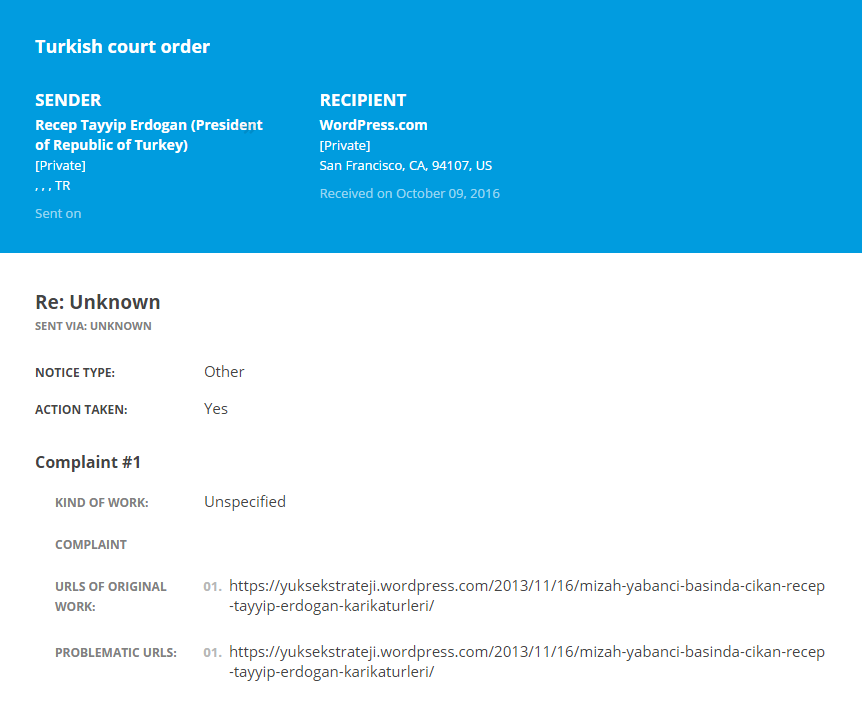 Earlier this year, WordPress (via transparency.automattic.com) stated that – absent a U.S. court order – it refuses to take action in response to takedown demands from Turkey.

However, it appears that the offending blog page is currently geo-blocked in Turkey, and when you enter the URL¹ into a Turkish proxy, you get this message…

…which links to an official WordPress page on how to bypass the block.

When I asked WordPress if it had taken action against the Turkish blog, I received the following response from Community Guardian Janet J:

Yes, that is correct. We are forced to geo-block the specific sites mentioned in the Turkish court orders or face a whole WordPress.com site block in the country. Instead, we direct users to a message explaining why the site is unavailable, and point them to this site:

When I then asked about WordPress’ policy of refusing to take action against bloggers, per the above mentioned Automattic statement, this was her response:

That blog post was correct at the time of writing, but our process has since changed, in order to find the best possible compromise to allow us to continue to ensure access to the bulk of WordPress.com for users in Turkey. Rather than have sites blocked by ISPs with no explanation, we have decided to implement blocks ourselves so that we can provide alternative messaging, and an explanation for visitors to the sites in question.

There is no good solution to the issue of political censorship, and we are constantly reviewing the processes to find ways to combat it, including taking legal action in Turkey where appropriate. Going forward, we’ll look into making the current process clearer in our next transparency report.

I also spoke with Jaume Capdevila aka KAP, an award-winning Spanish cartoonist whose 2013 cartoon of Erdoğan features prominently on the censored blog.

“[Freedom of expression] is a basic right of people, it is a basic freedom,” said Capdevila. “The debate of ideas is fundamental, and it enriches all. Censorship is the first step towards ignorance and fear.”

He went on to explain how satire “erodes the image of power.”

“To laugh means to lose fear, and fear is what keeps the totalitarians in power. It is therefore natural to react against cartoons, against journalists, and against the Internet, which is a means by which the population can inform and organise to recover lost democracy.”

Capdevila said he felt honoured to know his cartoon had succeeded in riling the Turkish despot, whom he described as “an authoritarian politician” seeking to maintain power through fear and repression.

“As a cartoonist it is an honour to know that an intolerant prohibits one of your drawings, of course! In recent years, the satirical cartoonist is a trade with more risk… we are not heroes and do not want to be, but things like this give some sense to our trade.”

He added: “One of the best things in our job is to know that there was someone in Turkey who thought that this drawing could be useful for his struggle for freedom and used it on his blog, or wherever. The ultimate meaning of satirical drawings is to reach the maximum of people and awaken in them something…”

In Cagle’s cartoon, the Turkish leader brazenly denies that his pants are on fire (literally), labelling his accusers “drunkard, extremist Twitterheads.”

In Chappatte’s cartoon, Erdoğan is building a huge statue of himself in Taksim Square as an “urban development project,” while angry protesters are gathered outside. 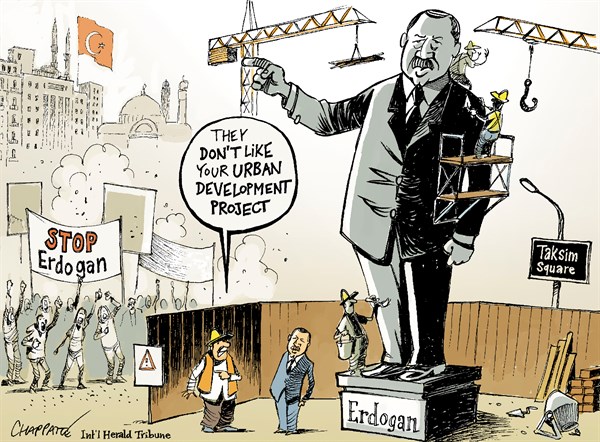 Turkey has a long and colourful history of trying to censor cartoonists.

Last year, Bahadır Baruter and Özer Aydoğan, from the Turkish satirical magazine Penguen, were sentenced to 11 months and 20 days in prison after having published a cartoon satirising Erdoğan’s heavy-handed treatment of journalists (the sentence was subsequently reduced to a fine of 7,000 Liras – equalling 1,600 Pounds – each).

Earlier this month, another top Turkish cartoonist, Musa Kart, was arrested as part of a roundup of journalists from the country’s opposition newspaper, Cumhuriyet.