Last week, the BBC Asian Network – which hosts the lively Big Debate radio programme – asked Twitter users to say what they thought was the “right punishment for blasphemy.” 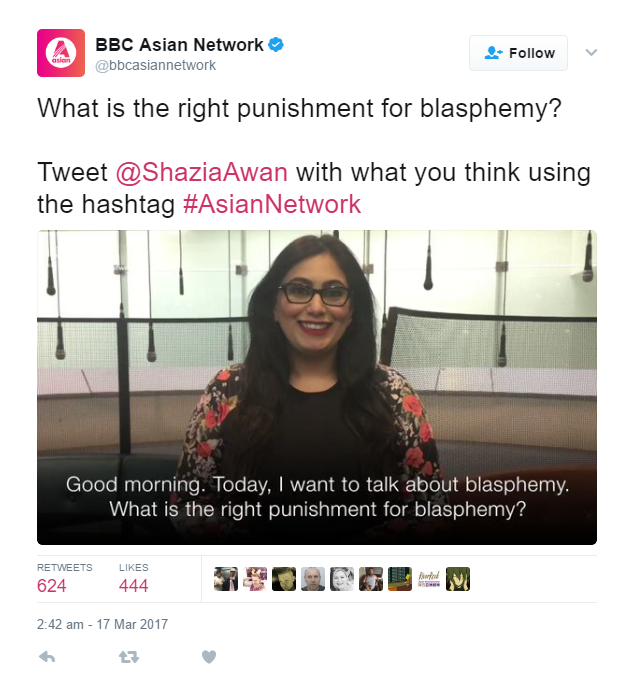 On Saturday, I asked the BBC – which is funded by public money – if it believed that blasphemy should be punishable.

Today, I received this lengthy apology from the BBC Complaints Team:

Thank you for contacting us regarding our programme, Asian Network’s Big Debate. We understand that you felt it was inappropriate to pose the question ‘What is the right punishment for blasphemy?’

Asian Network’s Big Debate is a live daily news and magazine programme. The first hour of the programme poses a question that the audience discusses on the phone, over emails and on social media. We regularly ask difficult and provocative questions on a wide range of issues that are relevant to a mainly British Asian audience usually on the basis of events in the news in the UK or South Asia.

The question was prompted by reports that Pakistan had asked Facebook to help investigate ‘blasphemous content’ posted by people in the country. Despite widespread condemnation, blasphemy is illegal in Pakistan, in some cases it is punishable with the death penalty.

We apologise for the poorly worded question and the way it was posted on social media, it was never our intention to imply that blasphemy should be punished. We agree that the question should have been better phrased and put properly into context.

Thanks again for contacting us.

Shortly after, I also received this separate response from the BBC Asian Network:

The Asian Network’s Big Debate asks difficult and provocative questions every day. This programme was an engaging discussion on the subject of blasphemy, but we admit that the question could have been phrased better and have since made this clear.

It isn’t the first time the BBC has apologised for asking “clickbait rhetorical questions” and “legitimizing an indefensible POV” – as award-winning British author Joanne Harris (MBE) charged in response to this September 2016 tweet by BBC Newsbeat re: video of US reality television star Kim Kardashian being accosted by “vile” Ukrainian prankster Vitalii Sediuk.

When I asked about the offending tweet, BBC Newsbeat said it had intended to “provoke conversation” but did not mean to legitimise Sediuk’s “prank.”

Last year, the BBC made over three billion pounds from publicly generated funding.