Round-up of news coverage re: Shooting the Messenger story about the Kremlin-backed company paying for Maria Butina’s legal expenses

Maria Butina, the first Russian to plead guilty to seeking to infiltrate and influence American policy makers in the run-up to the 2016 election, remains somewhat of a mystery. But her prosecution in Washington, D.C., last year shed light on yet another avenue through which Russia tried to influence American politics in 2016: namely, via an old-fashioned, on-the-ground operation, conducted not by experienced spies but by disarming political operatives. New revelations about Butina’s legal-defense fund in Russia shows that one of her backers has been trying to promote fringe separatist movements in the U.S. since well before 2016.

In 2018, Alexander Ionov, the founder of the NGO, called the Anti-Globalization Movement, began raising money for Butina through a fundraising website that says all proceeds will be “used to finance legal protection and to improve the conditions of Maria’s detention in prison.” The website was first discovered by freelance journalist Dean Sterling Jones. To date, Ionov has raised about 2 million rubles (approximately $30,000) to help pay her legal fees, he told me in a recent interview. The Russian embassy, which has been advocating for Butina’s release, did not return a request for comment.

Maria Butina, the Russian woman who’s alleged to have infiltrated gun rights and conservative circles to sway the outcome of the 2016 election, is still in custody awaiting her sentencing. She’s been in jail since July. According the Washington Post, Butina is cooperating with authorities…

Ionov is raising money for Butina’s defense through a group called the Anti-Globalization Movement. The website, peppered with glossy photos of Butina, purports to tell “Maria’s story.”

Writing on his blog Shooting the Messenger, Jones observes that the group that’s hosting the site for Butina’s legal bills got a Russian presidential grant of 3.5 million rubles (approximately $53,000) to bring members of Texas and California secessionist groups to a Russian conference in September of 2016.

Investigate Russia and Law & Crime also picked up the story.

Update, via “Here are all the Russian interference efforts that didn’t make it into Barr’s letter” by Casey Michel, ThinkProgress, March 27, 2019:

Special counsel Robert Mueller may not have found the Trump campaign colluded with Russia, but plenty of Americans — wittingly or otherwise — have helped Moscow’s election meddling efforts in recent years. Secessionists, Jill Stein and her campaign, and members of groups organized around gun rights and far-right Christian movements have spent the past few years cultivating ties with those close to the Kremlin and using their platforms to promote Russia-friendly ideas.

None of these groups were mentioned by Attorney General William Barr, who issued a letter on Sunday confirming that Russia conducted coordinated campaigns to interfere in America’s elections…

Russian cultivation of American secessionists — for example, groups who look back fondly on the days of the Confederacy or advocate for states separating from the U.S. to form their own country — date back to at least 2014, in the midst of the Kremlin’s attempts to disintegrate Ukraine. Multiple conferences held in Moscow in 2015 and 2016 brought separatists from places like Hawaii and Puerto Rico to Russia, gathering supporters with other secessionists from Italy and Spain. They were hosted and feted by Alexander Ionov, the head of an organization called the Anti-Globalization Movement of Russia (AGMR)…

Ionov, meanwhile, has been busy. Not only has be apparently gained more cachet in Moscow — he recently had a meeting with the Venezuelan ambassador — but as journalist Dean Sterling Jones recently uncovered, he’s been helping raise money for Russian agent Maria Butina. 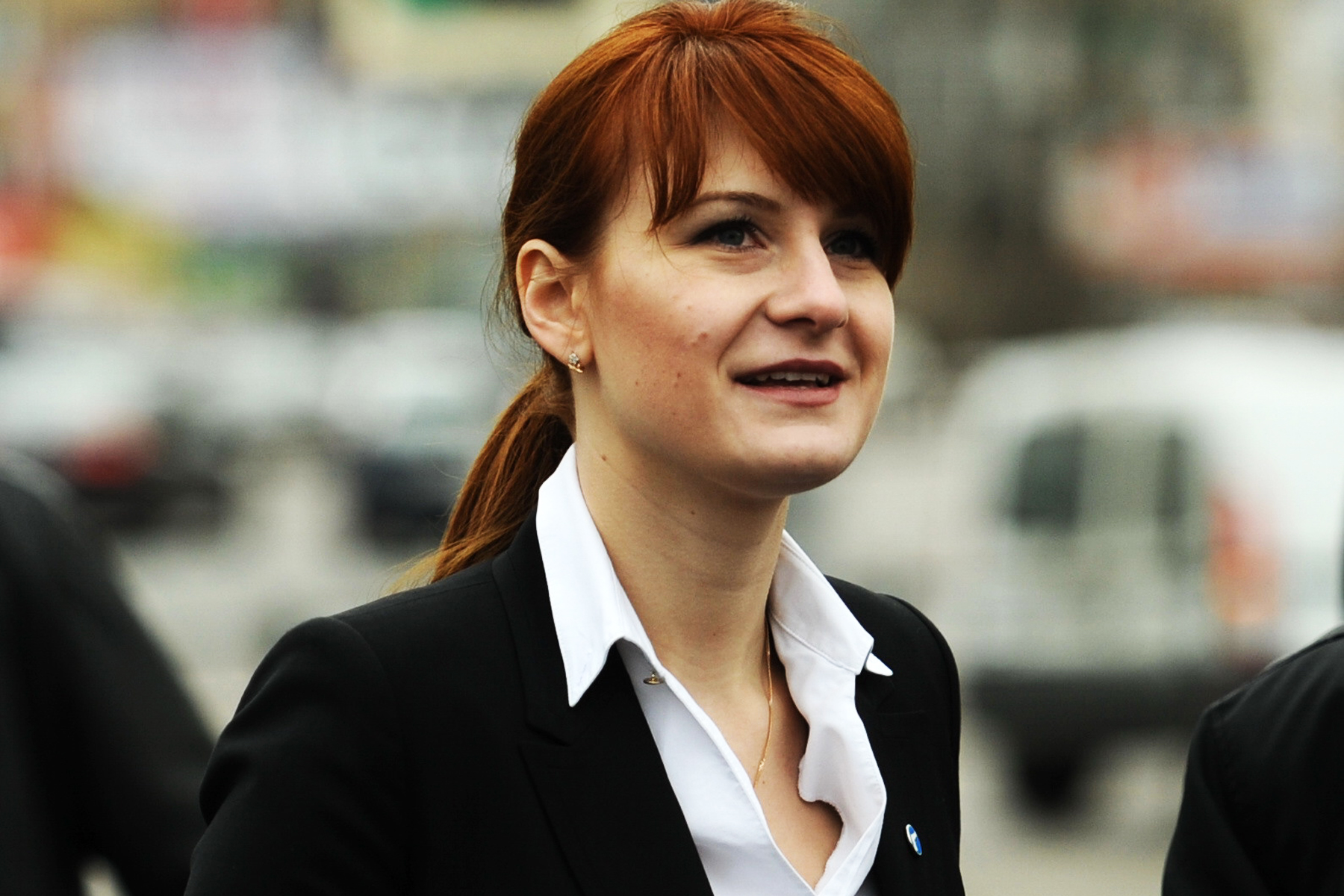 Maria Butina’s legal defense fund is being handled by a Kremlin-backed Russian company that hosted and boasted U.S. separatist groups shortly before the 2016 presidential election.

The Anti-Globalization Movement of Russia (AGMR), which is accepting donations on Butina’s behalf through a fundraising website set up last year by her lawyers, received a Russian presidential grant of 3.5 million rubles (approximately $53,000) to fly the leaders of Texas and California secessionist movements to Moscow for a sovereign nation-building conference in September 2016.

“[AGMR] supports the full sovereignty of nation-states including the sovereignty of Russia as an independent player on the political, economic and cultural world stage,” reads AGMR’s mission statement. “The movement aims to promote all aspects of the national security and traditional moral values. It opposes the attempts to impose a ‘new world order’ and the disastrous unification, which might result in the emergence of a single mega-totalitarian world state.”

The exact history of AGMR’s involvement with Butina—who in December pleaded guilty to engaging in a Kremlin-backed conspiracy to infiltrate prominent conservative groups in America—is unclear. But according to domain registration records, AGMR began its fundraising efforts in October with the launch of MariaButinaFund.ru, a Russian language mirror of Butina’s U.S. fundraising site, MariaButinaFund.com, launched two months earlier.

“The Maria Butina Foundation was created by her lawyers to collect donations in order to ensure her best possible protection in court,” reads a message on the Russian version of the site, which includes payment details for AGMR’s Alfa Bank account in Moscow.

Butina’s lawyer Robert Driscoll, listed as the fund’s co-founder, declined to comment for this item.

Gregory M. Wade, an Alexandria, VA-based bankruptcy attorney listed as the administrator of both sites, did not reply to multiple requests for comment.

AGMR was founded in 2012 by Alexander Ionov, a prolific Russian lawyer and businessman whose “work to strengthen friendship between peoples” has been commended by Putin himself. Ionov denies working at the behest of the Kremlin. However, a close look at his various pursuits, including a prominent position on the public council of Moscow’s interior ministry, suggests they enjoy a mutually beneficial relationship.

Ionov’s involvement with TNM and Yes California, for instance, came shortly after both groups were reportedly approached by the Kremlin-backed Internet Research Agency (IRA), better known as the Russian troll factory, to participate in a series of anti-Hillary Clinton rallies. Yes California later relocated its headquarters to AGMR’s offices in Moscow.

In 2017, Ionov represented Russian hackers Pyotr Levashov and Stanislav Lisov against claims by Spanish security services that they’d used fake social media accounts to promote Catalonia’s independence from Spain, a cause both AGMR and the IRA have also actively helped to promote. The pair were later extradited to the U.S. where they pleaded guilty to various cyber crimes.

In December, Ionov even attempted to visit Paul Whelan, the U.S. citizen currently being detained in Moscow on spying charges. Experts in Russian politics, including former CIA officer John Sipher, believe Whelan was arrested in retaliation for Butina’s prosecution in the U.S., claims denied by Putin’s spokesperson.

Ionov’s other connections to Butina include Vladimir Ovsyannikov and Roman Khudyakov, high-ranking State Duma officials who helped support Butina’s gun rights group, the Right to Bear Arms (RTBA). The two men currently work under Ionov at his private contracting firm Ionov Transcontinental (IT), which provides a range of legal, financial and security services, as well as helping to facilitate business relationships between foreign clients and Russian government agencies.

Ovsyannikov, IT’s Vice President for Government Relations, became involved with RTBA in 2013 after giving a speech at one of its rallies. Khudyakov, IT’s Vice President and a former Russian presidential candidate, joined the group that same year in an initiation ceremony along with: Alexander Torshin, the former Central Bank governor who allegedly directed Butina’s activities in the U.S.; and David Keene, president of the National Rifle Association, one of many prominent conservative groups Torshin allegedly used to gain access to Donald J. Trump’s presidential campaign.

When prosecutors indicted Butina last July, alleging, among other things, that she had traded sex for political access, Khudyakhov quickly rushed to her defense.

“She was friends with many men, with me, with other men, with men from all over the world,” he told Agence France-Presse.

Recently, Ionov came out in support of Butina, describing her in an interview with Voice of America (which did not disclose their affiliation) as a “human rights activist…who did not (collaborate) with Russian state bodies.”

Ionov did not reply to multiple requests to comment for this story.

Butina is currently awaiting sentencing. To date, she has raised approximately $16,700 towards the cost of her legal fees, but still owes her lawyers $610,000, according to a recent interview with her father, Valery Butin, in Russian media.