The Daily Telegraph publishes Page 2 clarification based on my corrections request re: Crown Prosecution Service’s skewed statistics on rape

Last month, I blogged about how the Crown Prosecution Service (CPS) exaggerated the 2015-16 rape conviction rate.

Those figures were widely reported in the U.K. press, including The Daily Telegraph. 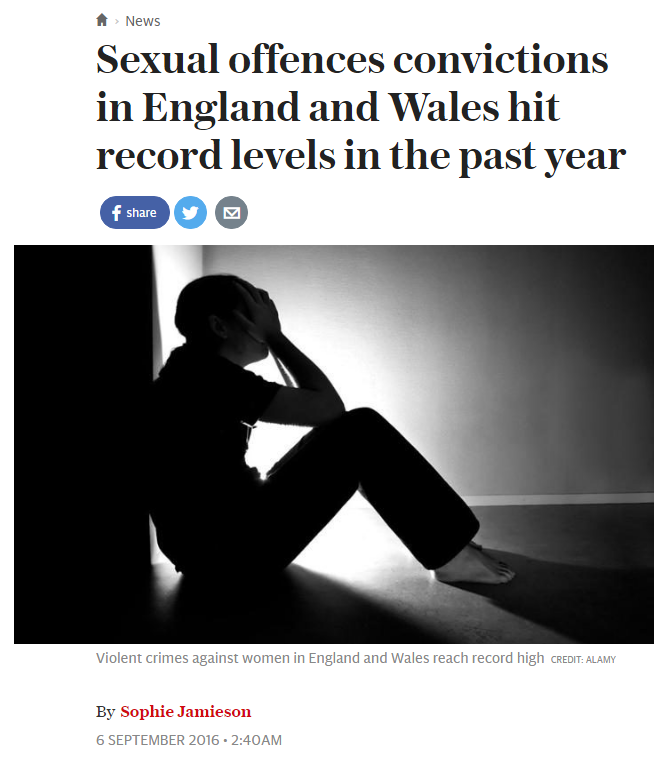 However, a close look at the CPS’ 2015-16 Violence Against Women and Girls (VAWG) crime report reveals that the rape conviction rate “includes cases initially flagged as rape [but] where a conviction was obtained for an alternative or lesser offence” and “where a rape charge is subsequently amended.”

Last month, I made a corrections request to The Telegraph regarding “Sexual offences convictions in England and Wales hit record levels in the past year,” the paper’s September 6, 2016 article which stated that in 2015-16 the “conviction rate for rape cases rose to 57.9 per cent of the 4,643 cases brought.”

Last week, I received notification from the Telegraph’s Head of Editorial Compliance Jess McAree informing me that the article had been updated.

Sexual offences convictions in England and Wales hit record levels in the past year, 6 Sept 2016

Thank you for contacting us about this article.

The statistics cited in the article come from the CPS report you identify and were relayed to our journalist via a CPS press release; as an official authoritative source, it was one on which she was entitled to rely, and the information was published in good faith.

Regarding the disparity between CPS and MoJ figures that you highlight, the VAWG report makes clear that whereas the CPS rape figures are compiled over the financial year, the MoJ collects its figures for the calendar year. Moreover the latter represent cases charged and convicted for rape only; as you say, CPS figures include not only cases resulting in conviction for rape, but also those “initially flagged as rape where a conviction was obtained for an alternative or lesser offence.”

This is clarified by the VAWG report on p49:

Where most rape cases under the CPS definition were indeed finally prosecuted as ‘sexual offences, including rape’, it does not appear that the CPS conviction statistics cited in our article are likely to be significantly misleading. Neither are they clearly irreconcilable with MoJ figures, as you suggest. Following your complaint, we asked the CPS how many convictions in the category ‘sexual offences, including rape’  were ‘pure’  rape convictions. They told us that this information is not available.

We are content to clarify this, and we will publish the following in our Corrections and Clarifications spot in a forthcoming issue of the Daily Telegraph. A version appropriate for context has already been added to the foot of the online article:

Rape conviction rate
An article on Sep 6 reported on CPS figures showing that the conviction rate for rape rose in the year 2015-16 to 57.9 per cent of prosecutions brought. We wish to clarify that though these cases were initially flagged as rape, CPS data show that the majority were eventually prosecuted in the principal offence category of ‘sexual offences including rape’. A breakdown of outcomes in this category is not available.

I trust that this is satisfactory.

Today, the following clarification was published in “Corrections and Clarifications,” Page 2 of the print edition of the Telegraph.

Note: I included MoJ figures in my request to highlight a disparity in the rape conviction rate. I didn’t suggest that MoJ figures are “clearly irreconcilable” with CPS figures, merely that it is reasonable to assume that the 2015-16 conviction rate is lower than the CPS claims.

In his reply, McAree cites p49 of the VAWG report, which states that “98.6% of cases initially flagged as rape were finally prosecuted for the principal offence categories of ‘sexual offences, including rape’ or more serious principal offences of ‘homicides’ or ‘offences against the person.’”

However, McAree also states that the CPS was unable to provide The Telegraph with a breakdown of outcomes in the category “sexual offences, including rape.”

Why not? That may prove to be a question worth asking. Stay tuned.

See also: “Unblurred Lines,” my September 23, 2016 item about my corrections request to the Independent newspaper.